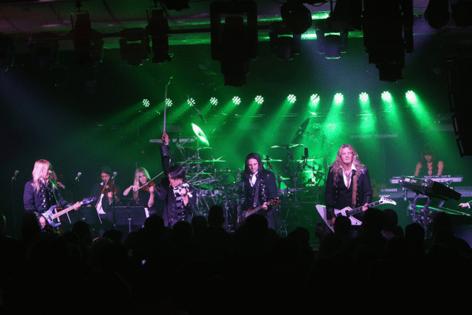 Although the virtual version proved quite popular, Al Pitrelli and Jeff Plate are thrilled to be back out on the road with the band in 2021 and celebrating the Christmas season once more in front of live audiences.

And they most definitely sound willing to comply with — perhaps even exceed — any new safety precautions that might be in place at the various venues visited on this tour.

“I think I could speak for Jeff on this one saying we’ll show up in hazmat suits and play, dude,” says Pitrelli, the musical director and guitarist for Trans-Siberian Orchestra. “We’re just like caged animals chomping at the bit. To not do what we’ve doing for 20 something years, to have that taken away from us last year … once you have it back in your hands, you love it, cherish it, protect it that much more.

“So I just want to put a guitar around my shoulders and stand out in stage center and say, ‘Let’s go.’”

The two musicians — who joined this Christmas prog-rock juggernaut in time for its first tour in 1999 — are speaking during a media teleconference in support of the band’s winter tour, which is now underway.

The tour celebrates the 25th anniversary of the band’s 1996 debut album — the multimillion-selling “Christmas Eve and Other Stories.”

The rock opera features many of TSO’s most beloved numbers, including “Ornament,” “Promises to Keep,” “This Christmas Day,” “O’ Come All Ye Faithful,” “Good King Joy,” “Old City Bar” and, most famously, the hit “Christmas Eve/Sarajevo 12/24.” The heartwarming piece, from the visionary mind of late TSO founder/composer/lyricist Paul O’Neill, explores such issues as kindness and generosity as it tells the story of an angel who visits Earth on Christmas Eve.

Twenty-five years after it’s release, “Christmas Eve and Other Stories” remains TSO’s signature work as well as its bestselling album.

“I’ve said along, I think this story is really the star of the show,” Plate says. “This is what kept bringing people back every year … when people connected with the story and realized it’s about them. It’s about everybody. This is just how people, just word of mouth, kept coming back. These audiences kept building every year.”