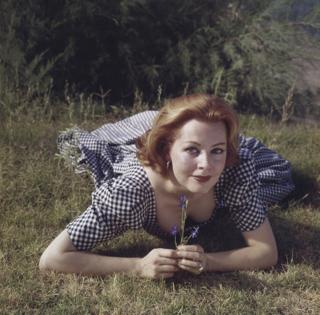 “She was the most positive influence on my life,” the actor wrote in a poignant Facebook post. “I will remember her laughter, her joy, her dignity as she navigated the challenges that she faced. Never an ill word about anyone crossed her lips. Her ability to forgive left me speechless at times.”

Dahl arrived in Hollywood in 1946 after a stint as a model and in theater, starring in numerous movies, including “Journey to the Center of the Earth,” “A Southern Yankee, “Scene of the Crime” and “Jamaica Run,” where she met Fernando Lamas, Lorenzo’s father and one of her six husbands.

While acting during the 1950s she found time to establish Arlene Dahl Enterprises, selling lingerie and cosmetics, and write a beauty column.

Dahl was also known for soap opera roles in “One Life to Live” and “All My Children,” and she guest-starred on “Love, American Style,” “Fantasy Island” and “The Love Boat.”

She and current husband Marc Rosen had a weekend retreat in the Hudson Valley, which was on the market this past summer for about $5 million, the Rockland/Westchester Journal News reported in August.

“She truly was a force of nature, and as we got closer in my adult life, I leaned on her more and more as my life counselor and the person I knew that lived and loved to the fullest,” Lamas said of his mother. “My sympathies go to her loving husband Marc Rosen, who, for the last 37 years, made her life so wonderful and joyous. Love you mom forever.”

Aside from husband Rosen and son Lamas, Dahl is survived by two other children, plus many grandchildren and great-grandchildren.