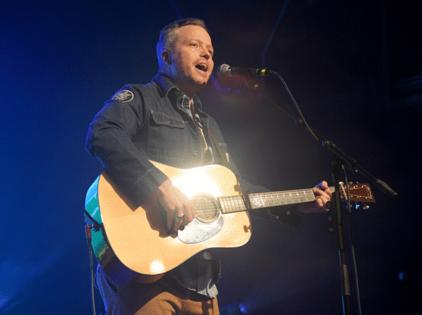 As he heads into the final stretch of a year that put him at the forefront of the vaccine debate and several other controversies, Jason Isbell only has one regret about the way he heavy-handedly handled 2021's COVID problem.

"I spent too much time arguing about something that shouldn't have been an argument in the first place," the Alabama-reared country-rocker said.

Five months after he and his workhorse band the 400 Unit played their first shows of summer — all requiring proof of vaccine or negative COVID tests to attend — Isbell is still on the road. In the interim, he made a lot of headlines for his rigid policies, and several other hot topics, too.

Still, it's hard to argue with the results. Isbell proudly pointed them out in an interview the week before Thanksgiving from his home outside Nashville, Tennessee.

"We were still able to go out and play a lot of shows," he said, "and we saw only a very small drop in attendance, which might've happened anyway. And honestly, the people who did show up made up for it at the merch table because they were excited to be there."

"I can't say we still provided a 100% safe environment for everybody, but it felt better than doing nothing."

No one could accuse Isbell of doing nothing when it comes to the causes and controversies of the day.

When fast-rising country music star Morgan Wallen — who covered Isbell's "Cover Me Up" on his latest album — was caught on tape drunkenly spewing racial epithets, Isbell condemned Wallen's actions and pledged to donate all his royalty money from Wallen's album to the NAACP.

When the 2020 election proved nail-bitingly close in Georgia, Isbell promised that a winning turnout of blue voters would prompt him to make an album of cover songs from the Peach State (where his former band, the Drive-by Truckers, formed).

Which brings us to Isbell and the 400 Unit's latest release, "Georgia Blue." The follow-up to their Grammy-nominated 2020 record "Reunions," the new charity album features remade songs from R.E.M., Otis Redding, James Brown, the Black Crowes, Indigo Girls, Cat Power, Drivin' n' Cryin', Vic Chesnutt and more. Vocal duties are shared by Isbell's wife and violinist Amanda Shires (a renowned singer/songwriter on her own) and guests such as Brandi Carlile and Julien Baker.