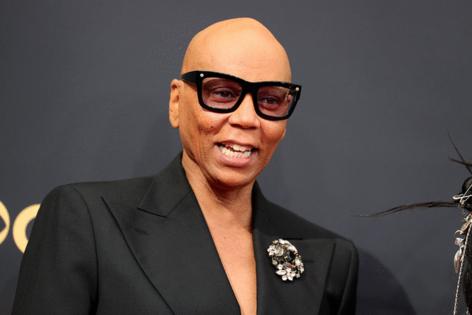 The annual downpour of peppermint-scented tales starring photogenic low- to mid-level celebrities has become a holiday-themed flood, boosting one of TV's most reliable — and profitable — cottage industries. At least 145 new films are debuting this year on Lifetime, Hallmark, BET+ and numerous other networks.

Most of these titles — "Dancing Through the Snow," "Gingerbread Miracle" and "Nantucket Noel," to name just three — position the enchantment of Christmas as the cure for all ills: grief, depression, financial woes, loneliness and family estrangement. In these alternate realities, romances are chaste, political and racial conflicts are nonexistent, small-town values are sacred and there's no such thing as a pandemic.

But this season, one network is giving the proverbial snow globe a vigorous shake.

Viewers switching the dial might come across a tight group of girlfriends debating the dynamics of "tossing the salad" and the more delicate "eating candy" on their way to a Santa-themed amusement park, where they take ecstasy and other substances. Or a group of drag queens and proclaimed "sluts" dressed as dominatrixes competing in a Christmas carol competition, singing an X-rated version of "The 12 Days of Christmas." Or a famous survivalist bragging during a talk show about eating "bull testicles" to increase his sexual appetite. Or a young girl spying on a department store Santa having sex with one of his "elves." (After their tryst, "Santa" plugs his sideline job dancing in "The Stocking Stuffers — A Triple XXXmas Spectacular.")

These scenarios and others appear in projects developed by Eva Longoria, Jamie Foxx, Nick Cannon and Kim Fields as they join forces with VH1 for its new "Naughty or Nice" holiday film slate. Spiced with raunchy dialogue, rowdy characters and outrageous shenanigans, the projects bring a sharper edge to the tried-and-true blandness of the Christmas movie genre.

"We wanted to break the mold in a loud way," said Nina L. Diaz, president of content for MTV Entertainment Group, which is producing the films. "Christmas movies usually offer comfort food, which is great. But Christmas films that are disruptive, edgy and more diverse are long overdue. We wanted to have a modern, naughty-or-nice take on the classic genre. We also wanted to open doors to fresh voices and have a more inclusive slate of movies that you haven't seen before."

An undercurrent of sexual tension simmers between a workaholic talk show host and a famous outdoorsman in "Adventures in Christmasing" (premiered Monday). RuPaul and 20 drag queens from his "RuPaul's Drag Race" reality competition series provide mischievous mayhem in "The B– Who Stole Christmas," set in a Christmas-obsessed small town (Dec. 2). Foxx is an executive producer of "Hip Hop Family Christmas, in which a prominent family of hip-hop musicians tries to reverse its scandalous image by participating in a live Christmas special (Dec. 6).

In "Let's Get Merried" (Dec. 13), a heartbroken Christmas hater vows to get married during a bachelorette party at Santa's Hamlet, where she and her posse talk about graphic sex and get high. And a gangsta rapper tries to turn his life around in "Miracles Above 125th Street" (Dec. 20).

Fields, Longoria and others participating in the VH1 films say they are unabashed fans of the traditional Christmas movie. "It's one reason why I keep doing them," said Fields, who reunited with her "Facts of Life" castmates for 2019's "You Light Up My Christmas." "These movies are feel-good magic. Our industry is notorious — in a good way — for providing that kind of experience."