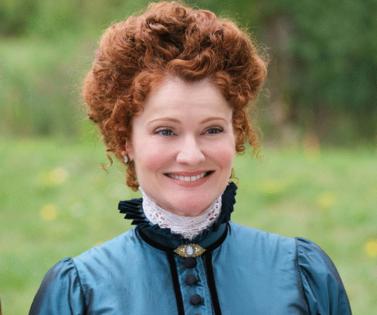 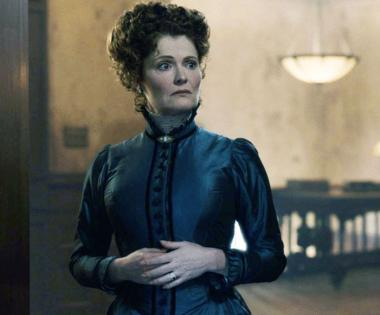 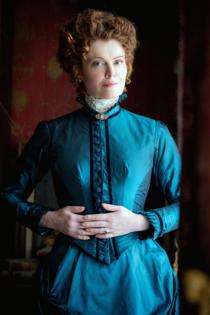 Actress Rebecca Wisocky never thought of herself as beautiful. And, for her, that’s a good thing. “I don’t believe that I was ever perceived as a great beauty in this business, and I think it’s been a boon and a strength for me because I always played older than I was,” she says.

“I looked like I was 40 since I was 12 years old, and that’s not really an exaggeration. And I never had to suffer the fate of being an aging ingenue because I’ve always played older. And I was able to do things that were, to me, just much more interesting.”

What’s interesting her now is playing the spectral grande dame of the haunted mansion on CBS’ comedy, “Ghosts.” Wisocky describes her character as the woman “who built the house where the story takes place and she lived and died during the Gilded Age in upstate New York, and was the wife of a robber baron. So she is representative of the decadence and excess and hypocrisy of that point in America history. I said, ‘YES, please.’”

Wisocky has been saying, ‘Yes, please’ for nearly 30 years. She started in the theater and earned roles on a dizzying array of TV series like “The Young and the Restless,” “Devious Maids,” “The Mentalist,” “Criminal Minds” and “Dopesick,” which is streaming on Hulu.

But the part that stirred everybody’s attention was the role of a drug-addled mom who enlisted her son in her crimes on “Law & Order: Criminal Intent.” “People still stop me on the street for that one,” she laughs.

“And I think I only got the role because no one famous wanted to be as downtrodden and unattractive as the role required me to be. I played a hustling drug addict who had her son rob jewelry stores. She was just a terrible person. But I think I managed to imbue a little bit of pathos in her. I think that was maybe my first big guest star role. In our business those things tend to snowball. When you prove that you can do it, more people are going to want you to.”

An adoptee, Wisocky credits her parents with allowing her to express herself in a way that was completely foreign to them. Her dad worked for a mineral processing company and her mom was an X-ray technician in York, Pennsylvania, where she grew up. “I was raised by parents who were genuinely curious about who I was and it was just such a wonderful gift,” she sighs.

“I didn’t grow up in an artistic family at all, but they just had a really lovely way of being curious about who this creature was and how they could help them become whatever that was going to be. I'm in a moment in my life right now where I'm very grateful for the parents I was raised by. My parents drove me countless hours back and forth to the theater. They drove me when I was high school up to New York every weekend to go take classes. They were devoted and very generous and are still my biggest fans.”

Another big fan is her husband, Lap Chi Chu, a lighting designer. Though they both worked in the theater and knew the same people, they’d never met. “We went on this first date which was a terrible first date,” she recalls.

“We didn’t seem to speak the same language at that point in time, but the thing that was remarkable about it was we couldn’t stay away from each other after that. We hung out the next night and the night after that. We fell in love as friends, and then fell in love,” she says.