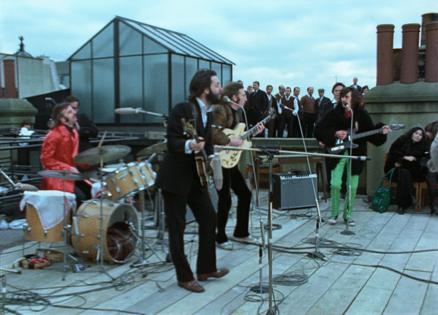 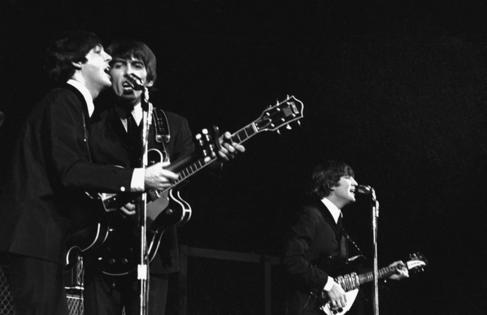 Paul McCartney sits in a chair, bass guitar propped on his knees, and plucks out a riff — nothing fancy, not yet, though he can tell he might be onto something. (His years in the world’s biggest rock band have sharpened his instincts.) Slowly — though not so slowly! — a vocal cadence begins to take shape, then a melody, then a lyric about getting back to where you once belonged. McCartney looks over at George Harrison, his bandmate in the Beatles, who’s lounging across from him inside a cold London studio in January 1969, and lets his eyes sparkle ever so slightly: He’s just created “Get Back,” which will go on to become a rock classic still beloved by fans half a century later.

The scene in “The Beatles: Get Back,” director Peter Jackson’s nearly eight-hour docuseries, is just one of many that can make you feel like you’re in the room with McCartney, Harrison, John Lennon and Ringo Starr as they write and record tunes that will end up on the group’s final two studio albums, “Abbey Road” and “Let It Be,” and rehearse for the famous rooftop concert that served as the Beatles’ last public performance.

Painstakingly assembled by the Oscar-winning “Lord of the Rings” auteur from dozens of hours of fly-on-the-wall footage originally shot by director Michael Lindsay-Hogg for his 1970 film “Let It Be,” “Get Back” — which just premiered in three parts on Disney+ — revisits a contentious period in Beatles history with fresh eyes; it explores McCartney and Lennon’s complicated partnership, Harrison’s feelings of being under-appreciated and the effect that Yoko Ono’s presence had on the band. It’s also a showcase of some glorious beards and knitwear.

“Get Back” isn’t the only music documentary this year to find remarkable new life in recovered source materials; think of Todd Haynes’ “The Velvet Underground” and Questlove’s “Summer of Soul,” both of which allow us access to people and moments we might’ve thought were lost to time. But Jackson’s epic is a singular immersion. Los Angeles Times pop music critic Mikael Wood, staff writer Randall Roberts and columnist Gustavo Arellano gathered to discuss it.

So much of the hype around “Get Back” is based on the idea that Jackson’s film challenges the conventional wisdom about the Beatles’ demise; it argues that early 1969 wasn’t quite as miserable for the Fab Four as previously assumed, a revelation that in turn has been marketed as a kind of balm for fans still traumatized by the band’s breakup.

As someone born in 1978, nearly a decade after the group split, I’ve never had an emotional investment in the end of the Beatles per se. My experience of the band (which I love!) happened totally out of order; I think the first LP I pulled from my parents’ vinyl collection was 1970’s “Hey Jude” compilation. So the sense of loss people felt after riding with the Beatles on such an insane journey — for me, that’s more of an intellectual proposition than a visceral one.

But what about you guys? Did “Get Back’s” framing — its explicit appeal to your emotions — entice you the way it seems to have enticed others?

GUSTAVO ARELLANO: I was born a year after you, Mikael, but the Beatles remain my favorite band of all time — no one else even close. I mourned their premature end once I learned about it and still do to an extent. But the framing that Jackson is using isn’t new.

“The Beatles Anthology” video/CD/book series from the 1990s already showed what “Get Back” is trying to tell us: Yeah, the Beatles broke up, but all things shall pass, blah blah blah — and wow, they were doing superhuman tunes and joking with each other even as they were falling apart! I didn’t buy it then, and I don’t buy it now. No breakup is so simple, or easy, so why try to state otherwise?