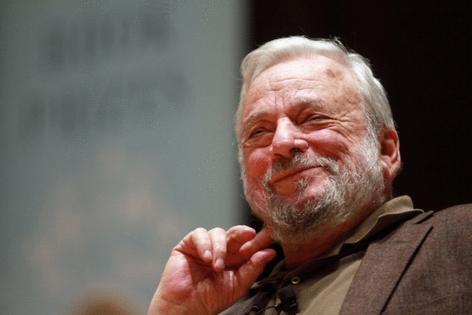 Stephen Sondheim fans all have their own benchmarks of discovery. First time I fell in love with an original Broadway cast album: age 14, maybe 15, ”A Funny Thing Happened on the Way to the Forum,” checked out from the Racine Public Library, downtown branch in Wisconsin. First time I ever really listened to an emotionally complicated song lyric: “Sorry/Grateful,” from “Company,” an alarmingly accurate crystallization of so many relationships. My friend Stephen, now a director and academic, and I listened to that album a lot.

First sensation of feeling terrifyingly outmatched by a high school theater production: “Follies” at Racine’s St. Catherine’s High School, 1977. It was basically the “Bugsy Malone” version of “Follies.” My son was in a high school production of “Sweeney Todd” a few years ago. Crazy as it sounds, a lot of people’s kids have done Sondheim by now, and not just “Into the Woods.”

I met my first real friend at college when, down the dorm hall, I heard Gordon (now a crack illustrator and comics artist) singing along to an LP of “Anyone Can Whistle,” going to town on “Everybody Says Don’t.” I thought no one else even knew that song.

The benchmarks go on, and on.

Sondheim’s death the day after Thanksgiving, at the age of 91, marks the passing of the American musical theater’s most incisive lyricist and grandest theatrical composer not just of his generation, but of the second half of the 20th century and part of the 21st. And the funny thing? The funny thing is that so much of his inspiration, fluidity and achievement sprang from what he called his “basic language”: the movies.

This doesn’t mean the now-common, often wearying practice of dragging a hit film onto the stage and adding songs, even if the story resists full-throated musical expression or a reason for theatrical existence. Since the Eisenhower era Sondheim wrote only one project based on a screen original: “A Little Night Music” (1973), taken from Ingmar Bergman’s 1955 masterwork “Smiles of a Summer Night.” “Passion” (1994) was taken from the 1981 Ettore Scola film “Passione d’Amore” but also from that film’s source material, the 19th century novel “Fosca.”

Like so many artists’ imaginations, Sondheim’s was fired and fed by the movies he saw in his childhood He liked broad comedy and melodrama best and never had much love for musicals, as he told the New York Times in his last major interview, conducted mere days before his Nov. 26 death at home in Roxbury, Connecticut.

For Sondheim, a key “aha!” moment came at 15, when he saw the composer-is-a-serial-killer potboiler “Hangover Square” (1945), with its wild, scary Bernard Herrmann score. The climax has the composer/murderer (Laird Cregar) premiering his magnum opus, titled “Concerto Macabre,” in a concert hall that eventually goes up in literal flames. Sondheim stayed for a second showing, memorized the concerto as best he could, played it, obsessively. He wrote Herrmann a note of thanks. Three months later Herrmann replied and told Sondheim how nice it was for a composer to get fan mail.

What he wanted, Sondheim said later in an interview for Craig Zadan’s book “Sondheim & Co.,” was to “write a horror movie, a background score for a horror film … unsettling, scary, and very romantic.” Elsewhere Sondheim told another interviewer: “During my formative years movies really molded my entire view of the world.”