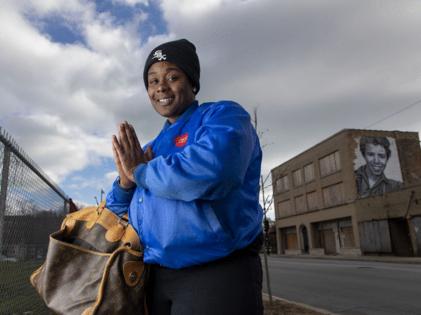 CHICAGO — Artist Jessica Disu, who performs as FM Supreme, may be a Chicagoan, but on the day that we spoke, Disu was in Washington, D.C. Her plan? To support the young students at Howard University in their protests against housing conditions on campus.

“It’s so beautiful to see so many young people caring about it, but when I was growing up, that just wasn’t the thing,” said Disu, who began her activist work as a teenager. “The movement was small. It never stopped, right? But it wasn’t a focal point in the media.”

For folks who have followed Disu’s robust and multifaceted career, her extended D.C. stay was not a surprise. An artist and an activist, Disu has dedicated her professional life to helping others, whether as a teacher or as the leader of her own nonprofit organizations.

But observers may also be moved and motivated by her music, too. Rapping from an early age, Disu will finally release her new album, “The Second Coming,” this year. A culmination of profound insight and personal redemption, Disu said creating this album was years — perhaps even decades — in the making.

Disu began rapping at the age of 10 while in foster care as a form of therapy and a way to express herself. In high school, an English teacher noticed her talents and offered her extra credit to attend an apprenticeship program at After School Matters through youth development organization Kuumba Lynx. Disu’s time with Kuumba Lynx and her skills as a rapper and writer led her to Louder Than a Bomb, where she became a two-time winner.

After graduating high school and attending school in New York City, Disu would return home to Chicago during the summers to teach workshops to young people at high schools. The success of these workshops eventually led to the creation of Disu’s first nonprofit, HERStory. Founded in 2010 in Chicago, HERStory is a writing, literacy and storytelling program that has grown to include outposts around the globe.

Later, when she was booked to host a youth peace rally in 2012, Disu realized her activism, her advocacy and her rapping could work together rather than against each other. “I realized my whole purpose is for this moment. It was never about me. It was never about me with the mic; it was about me lifting up these kids. God allowed me to blaze these trails, to open doors for them, let them speak,” recalled Disu.

Soon after, Disu founded the Chicago International National Youth Peace Movement, a mentoring and youth leadership development organization utilizing the arts, education, community service and civic engagement as transformational tools for positive social change. But she never allowed music to stray too far from her life. Around the same time, she also released the track “No Turning Back,” once described as the Chicago International National Youth Peace Movement anthem.

Disu said losing her cousin, Jasmine Marie Johnson, in late 2018 to domestic gun violence marked a turning point in her life and her career. Disu retreated from the public eye beginning in July of 2019 and that personal seclusion flowed well into the beginning of the pandemic.

“This time last year, I didn’t care if I lived or died,” admitted Disu, who said she didn’t know if she would ever rap again. “When you sit in the darkness alone, in the silence, you start to identify with it, you start to be very comfortable.”

It was an ex-girlfriend that inspired Disu to pick up the mic again. Observing her ex listening to other artist’s work, Disu knew that she was “better than all of them.”

After praying over a need to find a new direction, Disu woke up in the middle of the night this last winter feeling inspired. “I started swaying, but there’s no music and I ain’t talking to nobody so like, what’s in me? But I’m feeling the Holy Spirit. ... I know exactly what this is,” said Disu. “This is the Supreme, when I was 19, 20, 21 waking up in the middle of the night writing raps. I thought it was channeling through me.”

The result of that late-night creation was “This Is a Movement,” the first single from Disu’s upcoming album. Released earlier this year, the track is a fiery throwback imbued with insightful lyrics about loss, destruction and strength.

The music video for the song features Disu and a host of others not just in the city of Chicago, but around the globe. Bright and joyous, the video is a perfect showcase for an artist reemerging out of the shadows. Melding together her first love of music with her life’s purpose in advocacy, what has emerged is an impenetrable FM Supreme, one who aims to speak truth to power.