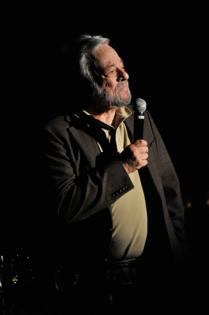 Stephen Sondheim had a habit of firing off letters to the editor when the book writers of his shows were given short shrift in the media. The sentiment was more than collaborative graciousness. What separated Sondheim, who died Friday at age 91, was his recognition that writing musicals is fundamentally an act of playwriting.

“I think any good musical starts with the book, the libretto, the idea, the story, the characters,” he told director Richard Eyre in “Talking Theater: Interviews With Theatre People.” “I can’t work on anything until I’ve discussed for weeks and sometimes months with my collaborator what the story is, why is music needed, why is music intrinsic as opposed to decorative, and what will music do to the story.”

No one can feign shock when a nonagenarian shuffles off his mortal coil, but the magnitude of Sondheim’s death feels seismic. I’ve been called upon to write post-mortem appreciations of Arthur Miller, August Wilson and Edward Albee — and only their legacies come close.

Sondheim deserves a spot on playwriting’s Mount Rushmore, for his contribution to the theater is as significant from a literary as it is from a musical standpoint. In truth, you can’t separate the words from the notes in his scores any more than you can pry apart form from content in his shows.

When Bob Dylan won the Nobel Prize in literature in 2016, I thought an equally smart outsider choice would have been Sondheim, who similarly approached songwriting as a dramatic art. It is no exaggeration to say that Sondheim changed the nature of theatrical storytelling. Through his lyrical cleverness and openness to dramatic invention, through his canny balancing of romanticism and anti-romanticism, he carved out space for ambivalence in a popular art form that leaned heavily on sentimental simplicity.

In “Finishing the Hat,” the first of his magnificent two-volume edition of collected lyrics and commentaries, Sondheim stressed that “every lyric in this collection is prompted by the beginning, middle or end of a culmination of incidents before it.” “In Buddy’s Eyes” from “Follies” may seem like a beautiful middle-aged love number when performed in a cabaret. But as he explained, the number “loses much of its tone and all of its subtext when disconnected from the placid surface of its music and the scenes and dialogue which have preceded it.”

“How can we know what Sally means or what she’s trying not to say, without knowing Sally?” he writes. “It’s as if we were asked to know Hamlet from his soliloquies alone, for what are solo songs but musicalized soliloquies, encapsulated moments even when addressed to other characters?”

Of course Sondheim didn’t invent “the book musical.” But he was a young disciple of Oscar Hammerstein II, who helped the American musical make an evolutionary leap into a more integrated form, first in his work with Jerome Kern on the 1927 musical “Show Boat” and later in his celebrated collaborations with Richard Rodgers.

The only child of affluent New York dressmakers, Sondheim essentially became part of Hammerstein’s country household after his parents divorced and he moved with his formidable socialite mother to Buck’s County, Pennsylvania. Sondheim looked to Hammerstein as a “surrogate father,” who opened up the possibility of theatrical songwriting. At the time, Sondheim was a precocious young classical piano player being groomed for a concert career. Broadway wasn’t in the cards.

In recounting Hammerstein‘s profound influence, Sondheim recalled to Eyre: “I showed him everything I wrote from the age of fifteen on, and he treated it absolutely on a level with professional work. … As a result of Oscar I think I probably knew more about writing musicals at the age of nineteen than most people do at the age of ninety.”