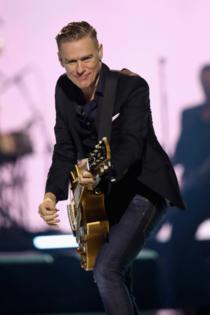 “Here I am,” Adams wrote on Instagram, making a reference to his 2002 hit.

“[I] just arrived in Milano, and I’ve tested positive for the second time in a month for Covid. So it’s off to the hospital for me,” he wrote.

The Ontario-born rock star, philanthropist and photographer had traveled to Italy for the unveiling of the new Pirelli calendar, which he photographed.

Adams, 62, shot a list of fellow powerhouse music stars — including Cher, Iggy Pop, Jennifer Hudson, Rita Ora and Saweetie — for the 2022 edition of the calendar by the Italian tire manufacturer.

He had been initially asked to work on the 2021 edition, but that had to be canceled due to the pandemic.

The “(Everything I Do) I Do It for You” singer was scheduled to appear in at least two VIP-attended events to celebrate the release of this year’s edition, titled “On The Road,” but it’s now unclear what his plans will be.

Initially created in 1964 as a marketing tool, the Pirelli Calendar has been shot by photography giants such as Helmut Newton, Herb Ritts, Richard Avedon, Annie Leibovitz, Bruce Weber and Paolo Roversi.

Adams is the first Canadian to join the impressive list.