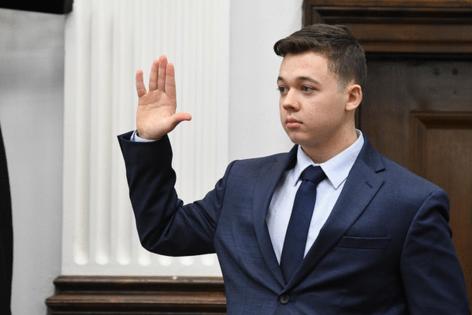 NEW YORK — Kyle Rittenhouse could get more than $3 million for a book about how he shot dead two men and wounded a third during riots in Wisconsin last August, people in the know tell me.

While many Democrats believe Rittenhouse, 18, belongs in jail, most Republicans are treating him like a hero.

He’s being offered jobs by GOP Congress members and he met with former President Donald Trump at Mar-a-Lago.

But sources say his easiest way to make money is a book deal.

“Tucker Carlson is encouraging him and will help promote it,” a source told me. “The goal is to hire a well-known conservative ghost writer and get it out fast for a summer release.”

Rittenhouse’s mother and sister will also be part of the book, I’m told.

“His family feels Kyle will forever have trouble getting jobs and making money,” said my source, “so the book is their golden parachute.”

Rittenhouse’s lawyer did not get back to me with a comment.

Charlie Ehrlich, the manager of a strip club, is suing the Miami New Times for libel for accusing him of helping O.J. Simpson murder his wife Nicole and her boyfriend Ron Goldman.