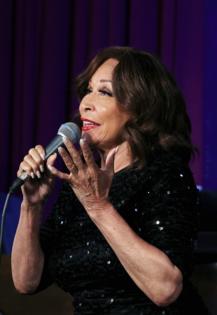 There’s much more to Freda Payne than meets the ear.

Although she gained international fame with the 1970 hit “Band of Gold,” the chanteuse is making new waves in the jazz genre — returning to her 1960s roots.

“It’s a relief because … people expected me to be a soul singer and booked me on R&B shows and tours but now I can be happy because now I can sing the kind of music that I feel most comfortable with,” the 79-year-old singer and actress told the Daily News. “I can do it all.”

A deep dive into her catalog will confirm that: she’s performed renditions of classic pop standards such as “‘Round Midnight” and “I Cried for You” in 1964 as well as spunky interpretations of blues classics “See See Rider” and “Nobody Wants You When You’re Down and Out” in 1971. Sprinkled throughout her body of musical work are soulful versions of Barbra Streisand’s timeless classic “The Way We Were” and Leon Russell’s “A Song for You,” alongside songs popularized by the Beatles, Nina Simone and the Righteous Brothers.

Accompanied by Frank Owens and a three-piece trio, the Grammy-nominated song stylist performed selections from the opus, and much more, for the first time at New York City’s Birdland Jazz Club on Nov. 22, a place she was very fond of during her years living in New York City during the 1960s.

“I used to go to the old Birdland when it was on Broadway in the ‘50s,” she recalled. “I used to go there a lot. I’ve never performed at this one.”

Payne, who started her professional singing career in big bands and performing with Duke Ellington, knows that even with bellowing out tunes composed by the likes of the Gershwins, Cole Porter, and songs popularized by Nat King Cole and Billie Holliday under her belt, she can't leave the stage without singing “Band of Gold.”

“I do,” she chuckled when asked if she ever gets tired singing the Holland-Dozier-Holland classic.

“But you know what? I’m so grateful that that song has really kind of helped bring me this far,” she added about her signature song. “Because no matter what I do ... people know who I am because of “Band of Gold.”