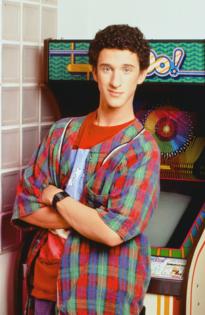 A.C. takes a bite of a burger and opines, “It’s a little weird, but great.”

The gang then shares memories of their old buddy, capped by Jessica saying wistfully, “He was so funny.”

“To Screech,” Zack says, and the group raises their spaghetti burgers in a toast of sorts to their departed friend.

Then the episode cuts to a montage of Screech’s funniest moments from the original series, set to a song memorializing him as the school’s first “Mr.” Miss Bayside. Diamond mugs for the camera and engages in the physical comedy that was his alone on the show.

The actor revealed his cancer diagnosis in mid-January and died not even three weeks later. “Dustin did not suffer. He did not have to lie submerged in pain,” his agent, Roger Paul, said in a statement back then. “For that, we are grateful.”

Before Diamond’s death, his team told EW they were in talks about him returning to the revisited series if it came back for a second season.