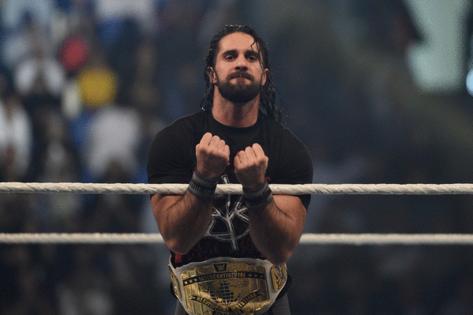 NEW YORK — The latest WWE beef, pitting a star wrestler against a hardcore Brooklyn fan, was unscripted and sparked by a bizarre two-year dispute.

Fan Elisah Spencer 24, charged wrestler Seth Rollins from out of nowhere after the grappler’s Monday night Barclays Center match with Finn Baylor, taking the WWE star to the ground before staff and security subdued and carried the intruder away. He now faces criminal charges in the wild attack.

Spencer told the Daily News he was trying to assist Rollins’ rival during the Monday Night Raw show — and wanted to settle a beef dating back to 2019 over what appears to be a catfishing scam concocted by someone posing as the popular wrestler.

“I apologized to the WWE for my actions,” Spencer told The News at his Red Hook, New Jersey, home. “I had a legitimate beef but as a grown man I could have settled it a different way ... If I saw him today I wouldn’t attack him. I’ve moved on.”

Spencer told The News he first met Rollins at a meet-and-greet a few years ago, where he asked the wrestling star for help to launch his own career in the business. But things went south after he started communicating on WhatsApp and other messenger services with someone he remains convinced was Rollins.

“He was asking to send me gift cards in exchange for money, mostly $500 or more to see if I was loyal,” he said. “He asked me to be a wrestling blogger for him. I wanted to work my way up.”

After buying about $3,000 in cards, the check that “Rollins” sent back bounced.

Spencer said he communicated with Rollins through accounts under his WWE name and his real name, Colby Lopez, and was blocked on social media by Rollins’ wife, Becky Lynch, who is the current Raw Women’s Champion.

He posted chat logs between himself and “Rollins” on his Instagram account after Monday’s incident, but none of those exchanges showed anything that would prove he was actually talking to the wrestler.

“All your true fans love you a lot and and the ones that are fake fans will be fake fans,” Spencer wrote in one social media exchange. “I am a real fan of yours.”

A familiar Philadelphia voice will fill in for Chris Cuomo this week after the anchor’s firing by CNN.

NEW YORK — Two days after being fired from CNN, Chris Cuomo is losing his other media platform, a daily program on SiriusXM satellite radio.

LOS ANGELES — After being nominated for two Grammy Awards, Drake appears to be saying thanks, but no thanks.

The musician has withdrawn his two nominations from final-round ballot voting ahead of the Jan. 31 ceremony, ...Read More

Three months after “Shang-Chi and the Legend of the Ten Rings” shattered a box office record upon its exclusive theatrical release, Disney has greenlighted a sequel to the groundbreaking Marvel blockbuster.

According to Variety, Drake asked the Recording Academy to take him out of consideration for two awards for an undisclosed reason, two weeks...Read More

LOS ANGELES — Netflix is still banking on comedian Dave Chappelle to bring the fans and has tapped the polarizing star to open its star-studded inaugural comedy festival.