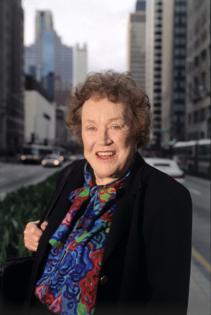 If you've seen Nora Ephron's "Julie & Julia," or been around long enough to remember Child on television (she starred in numerous instructional cooking shows from 1963 to 2000, most famously "The French Chef"), you have a general idea of this film's story: Young woman from posh California family travels to the Far East during World War II, falls in love, moves to France, learns to cook, and the rest is history. But "Julia," directed by Julie Cohen and Betsy West, puts Child's impact on American food into context: In an era dominated by Jell-O salads and grilled Spam, Child taught Americans that, yes, they could cook beautiful French cuisine. In her bestselling cookbook "Mastering the Art of French Cooking," and on television, she was a friendly, encouraging voice.

And oh, that voice. "Julia" is full of irresistible clips and interviews with its subject, trilling and burbling with her trademark enthusiasm, reminding her viewers that anything was possible and that mistakes are how cooks learn. ("You're alone in the kitchen; who is going to see?" she cheerily tells the camera, after dumping half of a dish on the stovetop.) Along the way, we get a touching portrait of her long and loving marriage (the filmmakers cleverly use excerpts from letters written from the Childs to each other, showing as handwriting on the screen), and a reminiscence of what it was like to have dinner at Julia's. (Everyone would get a task, a friend recalls, and if you were using your knife wrong, she'd help you with it.) Child died in 2004; her legacy, encapsulated charmingly in this film, lives on.