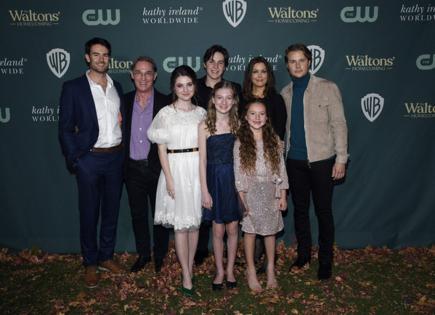 He also convinced now 70-year-old Thomas to return as the narrator and open the movie.

Actor Christian Finlayson, who plays the second eldest son and wannabe musician Jason, said the camaraderie you see on the screen is authentic.

“In the couple of weeks of production, we really became that family,” he said. “It wasn’t hard to pretend on camera to be one.”

Not to say he was all that familiar with the franchise, which hasn’t exactly translated to a new generation. After hearing about the audition, his mom told him about the show and he realized the “Family Guy” joke reference about “Goodnight John-Boy” he heard once came from this particular show.

Due to budgetary and time constraints, Haskell said they modified the ending of the movie from the original in a way that led the Walton family to celebrate Christmas at a Black church. Olivia’s friend, played by R&B singer and former “Solid Gold” host Marilyn McCoo as the preacher’s wife, invites her to her church for Christmas.

This also led to a scene where Olivia has to gingerly explain to her youngest daughter why the churches are segregated. Young told Haskell she wanted to add a line to emphasize that all people are welcome in God’s house. “We rewrote it,” Haskell said. “It made it better. It made it much better.”

They also cast a Black cop in 1933 in Virginia. Spiro said they did research and found out Blacks didn’t get hired as cops in the state until the 1940s. “It’s a little bit of a stretch but it’s within the realm of believability,” he said.

The entire film is set during Christmas time with snow everywhere. The reality of shooting this past summer in Atlanta was far different, with high temperatures typically in the 80s and 90s.

Spiro had to remind the actors about proper body language, to hunch their bodies and shiver as if they were cold.

“We wore thick wool coats,” Finlayson said. “It was very, very hot. But I did do a scene with John-Boy where we get into a snowball fight and he rubs snow in my face. That was refreshing!”

Haskell, who has now filmed five wintry movies in the Georgia summer heat including NBC’s 2015 “Dolly Parton’s Coat of Many Colors” and 2016′s “Dolly Parton’s Christmas of Many Colors,” said he now knows how to artfully blend snow mats, potato flakes, paper flakes and shaved ice as well as CGI from Atlanta’s Crafty Apes to make the films look convincingly chilly.

And to keep the actors in this film from collapsing from heatstroke, he had them wear special bodysuits with inserts to place ice packets under their winter coats.

Haskell is not shy about saying he hopes to replicate history if the film does well: “I’m trying to plant seeds of a TV series, something we can share with the world for years to come.”

The Waltons: Homecoming,” 8 p.m. ET Sunday on the CW, available the next day on the CW app and cwtv.com.