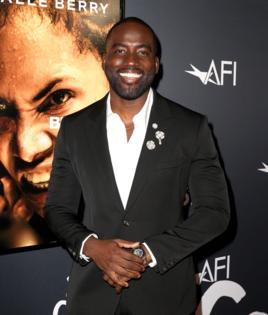 It was an easy decision for “Bruised” star Shamier Anderson to throw his hat into the ring.

The actor said he knew it was a “no brainer” to join Halle Berry’s directorial debut before he even finished reading the script. He relished making a movie that offers in-depth insight into the world of mixed martial arts.

“When you really zoom into it, these ... are individuals with so much heart and passion and wanting to be great,” Anderson told the Daily News.

The film, which premiered Wednesday on Netflix, stars Berry as Jackie Justice, a former MMA athlete who wants to make a comeback. Anderson’s character, Immaculate, owns a female fighting organization and offers Jackie the chance to return.

“Bruised” depicts the intense grind Jackie goes through to get back into shape while dealing with hardships in her personal life.

“Bruised” is the latest high-profile project for the Toronto-born Anderson, who starred earlier this year in Netflix’s space-set thriller “Stowaway” and has a main role on the new Apple TV+ science-fiction series “Invasion.”

He also recently finished filming “John Wick: Chapter 4.” The director of that movie, Chad Stahelski, was an executive producer on “Bruised” who previously worked with Berry on the third “John Wick” film.

“I sat down with Chad because of my role as Immaculate, and Chad was like, ‘I remember you, man. I liked what you did there.’ That film was a catalyst to having me in ‘John Wick,’” Anderson said.

Anderson praised Berry as both a co-star and as a director, describing her as “extremely collaborative” and “a visionary.”

“She really, really pushed for the best,” Anderson said, “which I loved about her.”

NEW YORK — Chris Cuomo spoke publicly about his suspension from CNN Wednesday amid fallout from revelations of how much the journalist had helped his brother, ex — New York Gov. Andrew Cuomo, field sexual harassment ...Read More

LOS ANGELES — Clarence Avant is a legend in the entertainment industry, known by many as the “Black Godfather,” a revered but limelight-shunning nonagenarian. And he was married for 54 years to Jacqueline “Jackie�...Read More

Dave Chappelle's former high school will still name its theater after him despite student protests and the controversy surrounding the comedian's recent Netflix special. The honor is meant "to demonstrate the importance of...Read More