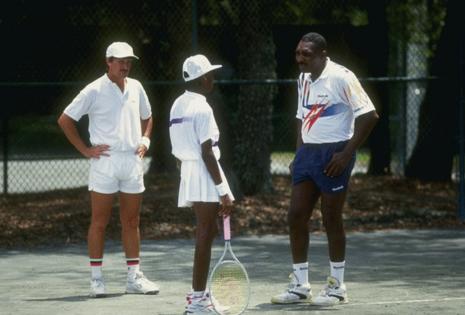 MIAMI — Will Smith has a new movie out. It’s called “King Richard,” and it’s a biopic about Richard Williams and his daughters, Venus and Serena. Of all the South Floridians who have seen it, nobody watched with a more discerning eye than Rick Macci, the legendary Boca Raton tennis coach who was an integral part of the story.

Having interviewed Macci on many occasions about his latest prodigies, covered the Williams sisters for more than two decades and enjoyed many a chat with their eccentric father, I was curious if Macci found the film as spot-on as I did.

“Best tennis movie ever! A masterpiece!” the gregarious Macci said Monday between tennis lessons. “I think it will stand the test of time because it’s about power, family, love, inspiration, motivation, education, following dreams, about so many different topics. It’s not just a highlight reel of Venus and Serena.”

Smith’s towering performance as Richard Williams, down to the hunched shoulders, shuffled gait and ever-present toothpick, is expected to land him a Best Actor Oscar nomination.

Macci was portrayed perfectly by actor Jon Bernthal, from the fast talking to the “Pop the popcorn! Extra butter!” he shouts at young players to get them to move their feet faster. Actress Saniyya Sidney, who played the young Venus, even requested — and received — a lesson from “the real Rick Macci” to make her tennis scenes more authentic.

Sidney and Demi Singleton, who played young Serena, captivated the siblings’ sisterly bond and their love for their three older sisters and their parents. Aunjanue Ellis plays Oracene “Brandy” Price, the siblings’ mother, a tough-as-nails woman who has never gotten the credit she deserves.

“I told Will [Smith] when I met him, the attention to detail, the walk, the talk, the one-liners, even the clothes, everything put me right back down memory lane,” Macci said. “The whole thing blew me away. Will was even more Richard than Richard was. It was amazing. No one can give a better critique than Rick Macci because I was there for four years, every single day, and this film gets it so right.”

Isha and Lyndrea Price, the two older sisters of Venus and Serena, were involved in the production of the film because they wanted the Williams’ controversial patriarch to be portrayed correctly. Isha, Venus and Serena were among the executive producers, and Lyndrea was a costumer.

There are a number of times during "The Summit of the Gods" that you can't help but wonder "Why?" Why are these mountaineers driven to attempt increasingly dangerous challenges to reach summits in altitudes their bodies ...Read More

Monarchies may fall and empires may crumble, but for the moment, epic family dynasties still reign with a vengeance on the screen. Those impatient to learn what awaits House Roy in "Succession" can tide themselves over in ...Read More

The Vallejo, California, native has been ...Read More

Lou Cutell, a veteran actor whose career spanned several decades and included a memorable role on “Senfield,” died this week. He was 91.

News of the actor’s passing was shared on Facebook by friend and actor Mark ...Read More

Joaquin Phoenix does not slaughter anyone or go on any riot-inciting rants in "C'mon C'mon." In a major switcheroo from his Oscar-winning previous film "Joker," he leans into the sweetly befuddled side that characterized ...Read More