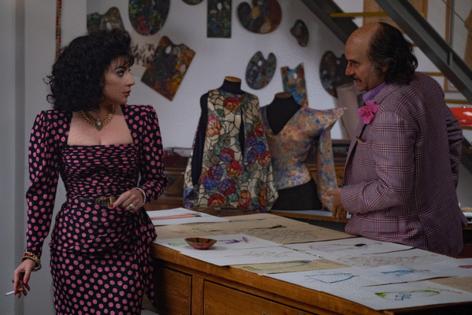 Monarchies may fall and empires may crumble, but for the moment, epic family dynasties still reign with a vengeance on the screen. Those impatient to learn what awaits House Roy in "Succession" can tide themselves over in the meantime with "Dune," with its futuristic clash between the spice barons of House Atreides and House Harkonnen. Or perhaps they might warm themselves with the fiery antiroyalist screed of "Spencer," which tracks Princess Diana's desperate flight from the House of Windsor. And now along comes "House of Gucci," Ridley Scott's canny and engrossing movie about an Italian luxury brand and a family brought low by greed, fraud and vicious infighting, plus a notorious black widow played by a coldly electrifying Lady Gaga.

We get a taste of that bitter end at the beginning. The movie opens on March 27, 1995, mere minutes before Maurizio Gucci (Adam Driver), the fashion house's former head, is gunned down in Milan by an assassin hired by his vengeful ex-wife, Patrizia Reggiani (Lady Gaga). Scott cuts away before the killing occurs, in a way that can't help but echo the violence-anticipating prologue of "The Last Duel," his recent movie about the travails of a 14th-century Frenchwoman. Here, hundreds of years later, is another moment of calm before the storm and also another story of a woman caught up in an overbearingly male world of power and intrigue.

One crucial difference is that while the heroine of "The Last Duel" is sold into a bad marriage, Patrizia wills herself into one. She's at a party in Milan in 1970, giving off Elizabeth Taylor vibes in a head-turning red dress, when she first meets the diffident, bespectacled Maurizio, who's so awkward — but charmingly so — that it takes her a beat to realize he's the heir to the famous Gucci fashion house. A reluctant heir, admittedly, who plans to practice law, shows little interest in the family business and is entirely naive about why Patrizia might have him locked in her sights. They soon marry, defying Maurizio's father, Rodolfo Gucci (an elegant, exacting Jeremy Irons), who takes one look at his future daughter-in-law and guesses what she's after.

It's hard to see how anyone couldn't guess, since Patrizia's darkly glittering eyes, which stop just short of burning holes in the screen, so nakedly telegraph her every desire. As in her previous unhappily ever after Cinderella story, "A Star Is Born," Lady Gaga temporarily dons a working-class shell, downplaying her natural magnetism in order to maximize it. Before long, Patrizia stands revealed for what she is: an avatar of ambition and, like Gaga herself, a couturier's delight, born to wear the silver-sequined evening gowns and furry après-ski ensembles dreamed up for her by costume designer Janty Yates. More than anything, Patrizia is a woman of insatiable hunger: She practically devours Maurizio in one molto vigoroso sex scene, and she looks ahead to the day that his millions — and his powerful place within the competitive Gucci family hierarchy — will be hers as well.

The bonds of family are extended first by Rodolfo's brother and business partner, Aldo Gucci (a boisterous, affectionate Al Pacino), who welcomes his new niece with open arms. He's the company's entrepreneurial genius, the one who continued his father Guccio's mission to transform a Florentine family-run business into a global brand. Maurizio and Patrizia soon relocate to New York (and have a young daughter, Alessandra) to work in Gucci's Manhattan stores. And before long, Rodolfo is dead, leaving his half of the company (in a roundabout fashion) to Maurizio and setting a furious round of power plays in motion. There are stormy confrontations and hostile takeovers, forged signatures and prison sentences, grim financial assessments and odd psychic readings (the latter delivered by Patrizia's friend and future accomplice, Pina Auriemma, played by a very game Salma Hayek).

Patrizia takes a keen pride in the business — the market for cheap Gucci knockoffs infuriates her — and, like a chain-smoking, mud-bathing Lady Macbeth, spurs her husband toward increasing acts of ruthlessness against his own family. One of their easier marks is Aldo's black-sheep son, Paolo, who fancies himself a great designer but whose incompetence and vulgarity seem to seep out of his pores like sweat. He's played by Jared Leto, unrecognizable under a bald pate and prosthetic jowls, in the kind of garishly extreme transformation that has become this actor's lip-smacking MO. It's an attention-grabbing stunt; it also works like gangbusters, particularly because Leto's performance — hilarious, sympathetic, full of tragicomic pathos — feels precisely scaled to the demands of a movie that often revels in its own posh, padded vulgarity.

I mean that mostly as praise; it's also a sure sign that Scott and his collaborators — including screenwriters Becky Johnston and Roberto Bentivegna, here adapting Sara Gay Forden's 2000 book — have fully comprehended their subject. The line between art and trash is always a porous one, in high-end goods as well as cinema. And not unlike some of the totems of luxury on display here, "House of Gucci" is a calculated, highly controlled amalgam of the stylish and the tacky. It's also remarkably savvy about the inherent kinship between fashion and cinema, something Rodolfo himself acknowledges when he reminisces about his own past career as a film actor, as well as the iconic floral scarf he commissioned for Grace Kelly.

This is a company that, at least since Ingrid Bergman clutched a bamboo-handled Gucci bag in Roberto Rossellini's "Journey to Italy," has long relied on Hollywood's glamour icons to sell its pricey wares. And so there's something fitting, even respectful, about the sheer number of movie stars that have been pressed into service here. Throwing subtlety to the wind with wild gesticulations and exaggerated Italian accents, they may flirt with and sometimes tumble headlong into stereotype, but they do so with a verve and commitment that, for the better part of two-and-a-half hours, disarms judgment and suspends disbelief.

Were any of these characters really this awful or this riveting? Did any of it actually happen this way? Possibly. More or less. Of course not. As in any slick bio-fiction, characters have been excised, timelines fudged, perspectives distorted. And yet, even amid the inevitable simplifications and exaggerations, it all coheres, with a kind of implacably grim logic, into an extended cautionary tale about how family and business shouldn't mix. That lesson is hastened by various outsiders and opportunists, including formidable Gucci lawyer Domenico De Sole (a chillingly poker-faced Jack Huston), maverick Texas designer Tom Ford (Reeve Carney) and the private equity firm Investcorp, all of which will do their part to separate the family from the company that bears its name.

"House of Gucci" will surely do its part to burnish the brand, even as it gleefully airs two decades' worth of dirty (but still utterly fabulous) laundry. But Scott, now 83 and an ever more clear-eyed, dispassionate observer of how power and industry operate behind closed doors, doesn't go out of his way to fetishize the inventory. He and his director of photography, Dariusz Wolski, shoot the Gucci family's executive suites and luxe residences in muted grays, lending an often-sepulchral cast to the shadowy interiors and the actors' faces. And they are no more intoxicated by the sight of double-G belts and Horsebit loafers than they were by the barrels of cocaine rolling through "The Counselor," Scott's brilliant 2013 thriller about a lawyer's disastrous swerve into the Mexican drug trade.