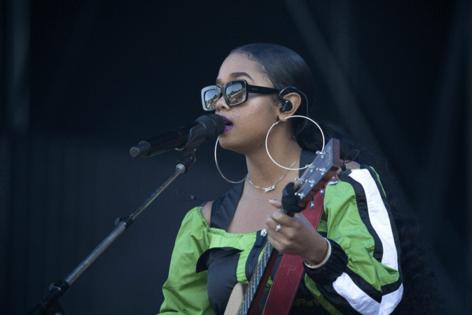 The Vallejo, California, native has been nominated for eight trophies, including in two of the four big “general field” categories: album of the year for “Back of My Mind” and song of the year for “Fight for You.”

Jon Batiste, the New Orleans musician, known for his work on “The Late Show With Stephen Colbert,” led the pack with 11 nominations.

H.E.R. was a big winner at the most recent Grammys, taking home two trophies — for song of the year (“I Can’t Breathe”) and best R&B song (“Better Than Imagined”). H.E.R. actually had two nominations in the latter category — the other for “Slow Down.”

All told, H.E.R. is a four-time Grammy winner with 21 nominations in total.

Here are the eight categories that H.E.R. is nominated in 2021:

LOS ANGELES — A member of the camera crew on the film "Rust" disputed claims by actor Alec Baldwin that he didn't pull the trigger on the Colt .45 prop gun, fatally shooting the movie's cinematographer and injuring its ...Read More

Amid an indefinite hiatus ...Read More