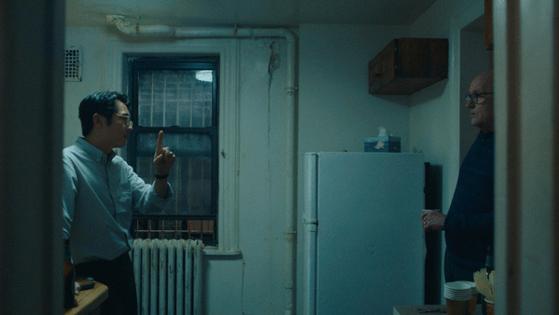 "The Humans" was an unsettling play. As a movie, it's flat-out terrifying.

Stephen Karam, a first-time film director, has done an extraordinary job of adapting his Tony Award-winning drama, the national tour of which played here in 2018. It's the same story and takes place as a family gathers for a Thanksgiving dinner at which laughter turns to bickering. But it doesn't feel like a filmed version of a play. It feels cinematic because Karam has reconceived it, really thinking about how to tell a story visually, with a camera that sometimes emphasizes what we're hearing and sometimes contradicts it.

The setting is a shabby New York Chinatown apartment whose courtyard is shaped like a cross (it's just the first of many symbols of Christianity the movie employs). Brigid (Beanie Feldstein) and partner Richard (Steven Yeun) are hosting her parents (Richard Jenkins and Jane Houdyshell, who won a Tony for this role on Broadway), grandmother (June Squibb) and sister Aimee (Amy Schumer) in their new place, which is empty but, in Karam's cramped images, claustrophobic.

All of the actors are exceptional but Schumer's casting is particularly brilliant because, right off the bat, it warns us that everything is not what it seems. Her Aimee is funny, as we'd expect the comedian to be. But, like the five others, she's hiding something and she gets a scene where Karam isolates her, away from the dinner, in an island of despair.

Throughout the movie, these people joke about old times or disagree about current plans but, even as everyday life goes on, Karam uses the camera to suggest a sinister presence lurking somewhere off to the left of the cranberry sauce.

"This seems like a happy holiday," you may find yourself thinking. "Why do I have a feeling everyone's about to get slaughtered?" Ominous noises, disgusting bulges on the walls and daring vermin all hint at an unnameable terror this family is just beginning to reckon with.

"The Humans" calls back to the Edward Albee masterpiece "A Delicate Balance," in which a suburban family becomes frightened of the future without understanding why. The dread was vague then but this time it's more like Karam is asking, "What's not to be terrified of?" Poverty, climate change, injustice, out-of-control health care costs, the planes that slammed into the nearby World Trade Center not so long ago — all come up in conversation over dinner but all are dismissed, as if politeness is more important than action.

The secrets they keep from each other and the stories they tell behind each other's back do not offer much hope that these six will make an effort to change. Lots of us won't. In the manner of Japanese horror movies such as "The Grudge" or "Dark Water," "The Humans" works by suggestion and misdirection but, unlike those movies, its terror is not supernatural. Instead, it's that age-old nightmare: We have met the enemy and he is us.

MPAA rating: R (for some sexual material and language)

Where to watch: In theaters and on Showtime Wednesday