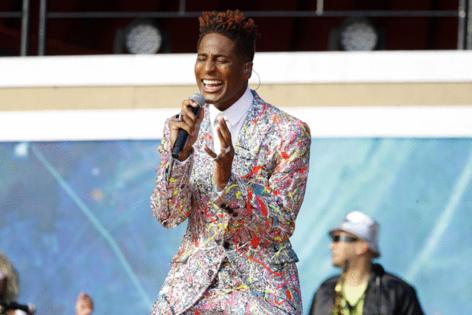 Best known as the bandleader and music director for "The Late Show with Stephen Colbert," 35-year-old jazz-R&B composer Jon Batiste would never have been predicted to earn the most Grammy nominations of any act this year.

But with his Grammy-leading 11 nominations across seven categories than span genre, composition and medium, the Jan. 31 ceremony could end up being Batiste's very own variety show.

The pianist and singer scored nominations for album and record of the year, for his "We Are" LP and its brassy, exultant single "Freedom," both of which will compete against splashy, big-budget releases from the likes of Olivia Rodrigo, Justin Bieber and Lil Nas X. ("We Are" spent just one week on the Billboard 200 upon its April release, peaking at No. 86.)

"We Are" is also nominated for R&B album, and three more songs from "We Are" earned nominations in different genre categories: "I Need You" for traditional R&B performance; "Movement 11'" for contemporary classical composition; and "Cry" for American roots performance and American roots song.

After two year of protests and deep introspection about the sanctity of Black life and art in America, "Cry" hit a plaintive note about upheaval: "Who you do you love when push comes to shove?" he sings. "How does it feel when it's getting too real?"

Batiste has already enjoyed a fruitful year at awards shows, pulling down a Golden Globe and an Oscar for "Soul," which he shared with Trent Reznor and Atticus Ross. His work on the film, which follows a Black jazz pianist through the afterlife and reincarnation, made him the second Black composer to win the Academy Award for original score, after jazz legend Herbie Hancock.

Like Hancock, who won album of the year in 2008, or Esperanza Spalding, the jazz bassist who beat out Justin Bieber for new artist in 2011, Batiste is the kind of consummate instrumentalist that Recording Academy voters have rewarded in the past, sometimes to the bewilderment of popular music fans and TV viewers.

The scion of a legendary New Orleans jazz family, Batiste has released eight studio albums and five live albums, and collaborated with acts ranging from Stevie Wonder to Willie Nelson to Ed Sheeran. He joined "The Late Show With Stephen Colbert" as bandleader and music director in 2015.

"You know what's deep is God gave us 12 notes, it's the same 12 notes that Duke Ellington had, that Bach had, Nina Simone," he said after winning his Oscar. "I'm thankful to God for those 12 notes."