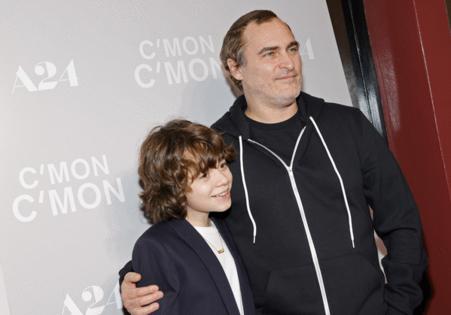 It’s not a holiday movie by most definitions. But “C’mon C’mon” makes for ideal holiday theatergoing, as long as going to a theater’s in your pandemic wheelhouse.

It’d be compatible on a double bill with “Encanto,” of all things, so that an 11- or 12-year-old might experience two warm, family-centered, contrasting reminders that none of us are perfect but all of us deserve understanding. Writer-director Mike Mills’ film, starring Joaquin Phoenix as a public radio journalist who reenters his nephew’s life, garnered an R rating for a little language here and there. Yet with a film expressing a sincere interest in how kids navigate difficult, unpredictable stretches of their lives, 11 or 12 seems fine to me, sez the big-city liberal who listens to a lot of public radio.

This is a droll and extremely well-acted tale of a family in crisis, and in progress. If you can remember back before “Joker,” Phoenix boasts the range and the ambition to take on musical biopics (”Walk the Line”), peculiar futurist romantic comedy (”Her”) and plenty more. Here, in Mills’ most compact and conventionally shaped narrative to date, he plays Johnny, who’s between relationships, currently traveling the country on a radio project involving extensive interviews with children about the state of their country, their lives and their future.

Meantime New York-based Johnny’s present tense is getting complicated. His semi-estranged L.A. sister Viv (Gaby Hoffmann) has a bright, challenging 9-year-old, Jesse (Woody Norman). Viv’s partner Paul (Scoot McNairy) has recently taken a job with a Bay Area orchestra. Paul is bipolar, and Viv reluctantly asks Johnny to take Jesse for a while, so she can go help Paul through his latest, and worst, period of adjustment.

“C’mon C’mon” takes Johnny and Jesse on an uncle/nephew odyssey, as they travel from New York to Detroit to New Orleans and back east again. Jesse’s coping mechanisms include extensive roleplay; he likes to pretend he’s an orphan on the run, looking for a place to call home. Instinctually Johnny gets Jesse interested in his audio equipment, and much of the sound design in Mills’ movie devotes time, and aural space, to the sounds Jesse captures using his uncle’s headphones and a directional microphone.

The storyline proceeds in a straight line, but true to form Mills’ preoccupations spin a web of flashbacks, interruptive asides, quotations from various writers. Also, and often, abrupt vignettes play out where something awkward or testy or charming happens to Johnny and Jesse. Then we’re suddenly in a different overhearing Johnny (who keeps an audio diary) ruminate over mistakes made, or moments of connection that linger. It can get a mite busy, and as with Mills’ previous films, notably “Beginners” and my favorite so far, “20th Century Women,” there’s an archness and nattering overelaboration at work and play, not always fruitfully. But never for long.

“C’mon C’mon” feels like a conscious step away from the ensemble sprawl of “20th Century Women.” Just when you grow frustrated with some of the developments (not one kid-gets-lost-in-NY sequence, but two; a scream therapy climax that feels like a sudden intrusion of screenwriter software) the actors get the breathing room and the material they need. For all his natural, off-center intensity Phoenix plainly loves working with, and responding to, other actors. Norman is terrific, in a role beaming in and out of idealized emotional reality; Hoffmann’s Viv, I believed every second, both as written and as acted.

Like several others movies this season, this one’s shot in what used to be a rarity: black-and-white, in this case by cinematographer Robbie Ryan (”The Favourite,” “Fish Tank,” proving he can light every sort of style). There’s a distinct difference in shading, detail and quality between how “C’mon C’mon” looks and how the flatter, less expressive light and shadow of “Belfast” operates. It’s a beautiful thing to watch. Simple transitional shots of an L.A. residential street, or one of Johnny and Jesse’s bedtime reading sessions, are lavished with visual care without turning Mills’ compact story into a fairy tale.

Will you be moved by the film’s central, flowering relationship, which opens up roughly the way you think it will? Well, I was. Even with the sobering assessments of climate change, recent political nightmares and the whole of contemporary America contributed by the kids Johnny interviews, Mills creates a plaintively optimistic vision of what a family, and maybe a country, can be — if we just keep asking questions.