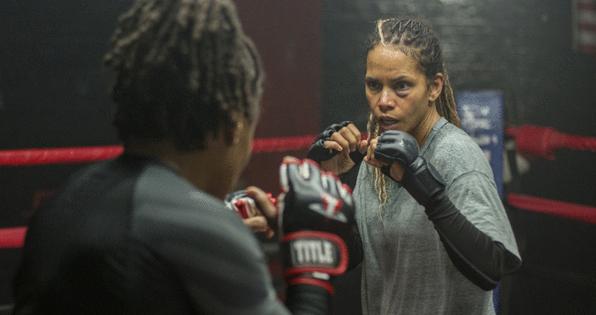 Among those who trained with Berry was Valentina Shevchenko, the current UFC flyweight champion, who also stars in “Bruised” as Jackie’s opponent, Lady Killer.

“I felt how strong Halle was,” Shevchenko told The News. “I would say that if Halle would step into the cage for a real fight, she would bring a lot of trouble to many girls.”

Shevchenko, 33, admired how Berry succinctly communicated her ideas to the cast, and praised the message of resilience in the movie, which is playing in limited theaters.

“It’s about the power of character,” Shevchenko said. “No matter what, no matter how hard your life is gonna be, you will find a way to happiness, but you will have to struggle.”

Berry, who won best actress at the 2002 Academy Awards for “Monster’s Ball,” is proud of her first experience as a movie director.

“In many ways, it was very familiar. I’ve been on movie sets for 30 years. But in many other huge ways, it was a huge difference and a huge challenge, mainly because I had such a heavy acting role,” Berry said.

“There were days when it seemed like I had bitten off more than I could chew, I would tell you honestly. Those were hard moments. ... And then I would quickly remind myself of why I wanted to do it, and get my thoughts together and keep pushing.”