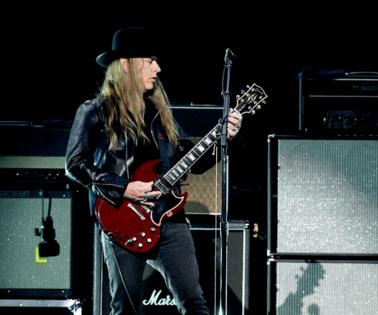 Jerry Cantrell has nothing left to prove. It's been three decades since the Alice in Chains singer/guitarist summited the music world with his hard-rocking brethren, who satiated their die-hard following with 2018's return-to-roots "Rainier Fog" album, earning a Grammy nomination along the way. Instead of taking time off once touring wrapped, Cantrell embarked on making his first solo album in nearly 20 years, the superb "Brighten," released last month to positive reviews.

Thirty-some years in, Cantrell sounds as hungry and restless as the kid making noise in Ballard's old Music Bank studios, with highlights like desert rock noir "Atone" ranking among some of the best coming out of the AIC camp since their days with the late great Layne Staley (if not ever). The songwriting on the trust-your-gut record, made with a cadre of friends including fellow Seattle rock royalty Duff McKagan, has stronger echoes of Alice's acoustic EPs than the sludge-hammering chug rock that placed the band on the heavier end of the grunge spectrum, while also breaking new ground for Cantrell.

We recently caught up with the AIC co-founder, who's streaming a performance evening of songs, storytelling and Q&A on Dec. 1. This conversation has been edited for length and clarity.

Q: We're coming up on 20 years since your last solo record. Why was now the right time to do this?

A: I've been lucky enough to have a job where you just follow what feels right. I started thinking about the idea as we were winding down the "Rainier Fog" tour in 2019, and so I started recording little snippets of ideas and cataloging stuff like I normally do. I'll do that for a period of time and then I'll wade through and see what I've got and then start building stuff up. Over that winter, I spent some time writing and demo-ing and looking at a couple older ideas that I hadn't developed yet, and that turned into what this record would become.

You just follow your gut, that's kinda what this business is about. It's about creating something out of nothing, just going with what feels right. I've been in this band, December will be 34 years, so we know how it goes. When you make a record [writing, demo-ing, recording, art, touring], it's generally about a three-year cycle. It's good to take a little time off and breathe a little bit after that. I planned on using my time to make this record. Of course it got a whooooooole lot longer with COVID. A funny side effect of it taking way longer than I wanted it to, I got three fantastic players that I didn't initially have in the project: Duff McKagan [bass], Abe Laboriel Jr. [drums] and Vincent Jones [keys] came on later in the project and the record just got richer with their involvement.

Q: I know Duff played on "Atone." Is he on anything else?

A: Yeah, "Atone" is, in Duff's words, a Frankenstein track. It's kind of me and him. When I write, I put down a basic idea of everything. I'll do some drum machine drum beat, I can play bass enough to [put together] a cool bass line once in a while, I can do the guitars and I can sing, so I kinda flesh it out. And then — that's the great thing about taking it to the band or taking it to people that actually play those instruments well [laughs] — is they elevate it and put themselves in, too, and take it places you never would have imagined or could've achieved on your own. So yeah, "Atone" is mostly Duff, but it's a little Frankenstein. He plays on about six songs and I do a couple of tunes myself.

Q: Was there anything sonically you wanted to try or explore that didn't feel like a right fit for Alice?