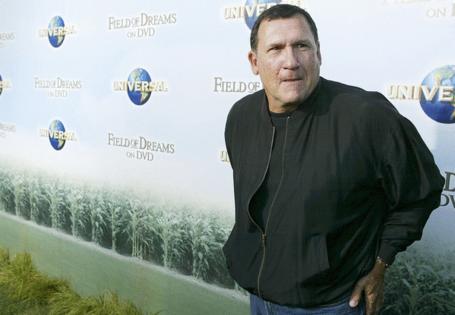 Art LaFleur, the prolific character actor who portrayed baseball players Babe Ruth in 1993’s “The Sandlot” and Chick Gandil in 1989‘s “Field of Dreams,” died last week after a 10-year battle with atypical Parkinson’s disease, his wife, Shelley LaFleur, said on Facebook. He was 78.

“He was a generous and selfless man which carried over to his acting but more importantly it was who he was for his family and friends,” Shelley LaFleur wrote Thursday. “I was so very lucky to have had a 43 year relationship with a man who cherished me and who I adored. Art was larger than life and meant the world to us.”

“The Molinator Art LaFleur passed last Wednesday,” his “Santa Clause” co-star Tim Allen tweeted Saturday, referring to the nickname for LaFleur’s Tooth Fairy — think “molars” — in the Christmas films. “This man a kind and gifted actor, husband and father Peace to you our beloved tooth fairy. And prayers to your family.”

Born Sept. 9, 1943, in Gary, Indiana, Art LaFleur didn’t start his career as an actor until he was in his 30s. After moving from Chicago to Los Angeles to pursue work in the entertainment industry, he got his first role in the 1978 TV movie “Rescue From Gilligan’s Island.”

His TV work would grow to include appearances in shows such as “Webster,” “Hill Street Blues,” “Thirtysomething,” “ER,” “Malcolm in the Middle” and “Key and Peele.” On television and in movies, he often played the cop, the dad, the coach, the tough guy.

LaFleur appeared in touchstone films including “Field of Dreams,” where he played Charles “Chick” Gandil, the ringleader of the scheme to fix the 1919 World Series. He was a gruff Tooth Fairy in Allen’s “The Santa Clause 2" and “The Santa Clause 3: The Escape Clause.”

In “The Sandlot,” he appeared as Babe Ruth in a dream sequence, memorably delivering the line, “Remember, kid. There’s heroes, and there’s legends. Heroes get remembered, but legends never die. Follow your heart, kid, and you’ll never go wrong.”

Atypical Parkinsonian disorders have some signs and symptoms of Parkinson’s — muscle stiffness, tremor and problems with walking, balance and fine motor coordination — but do not respond well to treatment with drugs commonly used against Parkinson’s, according to Johns Hopkins Medicine.

Late into the unwieldy end-of-days satire "Don't Look Up," writer-director Adam McKay briefly sets aside the easy snark and broad targets and reaches for a note of awe. He just about hits it. An enormous comet has appeared...Read More

The top 10 DVD rentals at Redbox kiosks for the week of Nov. 29:

Q. I'm looking for a TV or monitor with good old picture-in-picture, and I am having no luck. It will replace my current 37-inch Vizio and I want to buy something in the 45-55 inch range. I don't use the tuner and just ...Read More

The fake school bells on the set of his new show send Tyler James Williams back to elementary school in Yonkers. This time, though, he’s on the other side of the desk.

LOS ANGELES — In July, the Long Beach singer Giveon played to tens of thousands at Lollapalooza in Chicago, the first festival of his short but ambitious R&B career.

"I really wasn't sure how it would go," said the ...Read More