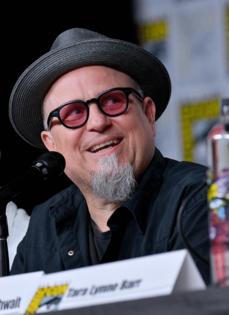 The Scooby gang comes together for a "Friends"-like reunion that gets interrupted by a ghost terrorizing the Warner Bros. Studios. Too bad the menace is a lot less frightening than Ugly Naked Guy. Clips from past episodes will make you wonder how the Mystery Machine van has kept motoring for more than 50 years. Adults nostalgic for their Saturday-morning cartoon appointments may appreciate the cameos from Speed Buggy, Captain Caveman and other long-forgotten 'toons. 8 p.m. ET Friday, CW

Vibrant Natalie Morales has toiled in so many dud sitcoms (including playing the title role in "Abby's") that she is in danger of being dubbed a "show killer." So the time is ripe for this comedy/drama movie, which she directed and co-wrote with Mark Duplass. She plays a teacher hired to give online Spanish lessons to a wealthy man, played by Duplass. Their relationship takes lots of surprising turns as the two learn more about the challenges each faces when they're not on screen. On demand

Since launching this delicious series last year, Selena Gomez has held her own with Steve Martin and Martin Short in "Only Murders in the Building" and released a well received "Revelacion," a Spanish-language EP. Thank goodness she's still finding time to spend in the kitchen. The young star's warmth and goofiness shine through as she stumbles through new lessons from Kwame Onwuachi, Ayesha Curry and Aaron Sanchez. Watch your back, Rachael Ray. HBO Max

The chiller would be an excellent companion piece to "Babadook," also an Australian-made horror movie where the real terror comes from the ways our minds and bodies let us down. Emily Mortimer gives an unflinching performance as a woman reluctantly caring for her mother, whose home is littered with the telltale Post-it note reminders that come with memory loss. Strange noises and mysterious disappearances produce several satisfying scares, as well as some hard truths for Mortimer's character. Showtime

Bobcat Goldthwait is best known for destroying late-night show sets under his wild-man persona. Dana Gould is a longtime writer for "The Simpsons." But they've written a new chapter in their careers by teaming up for performances in which they swap stories. This film chronicles their friendship and stand-up tour. Comedy teams have fallen out of fashion, but these two veterans show why they can still work. Highlights include Gould recalling his appearance on Bob Hope's last TV special and Goldthwait dissecting his feud with Jerry Seinfeld. On demand