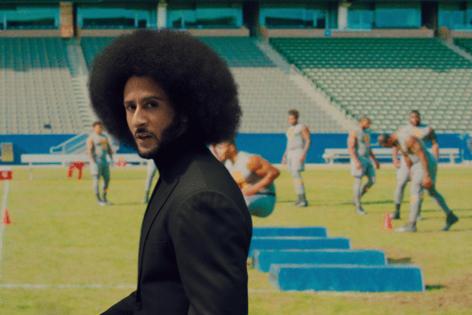 This isn’t about the 2016 NFL preseason when then-San Francisco 49ers quarterback Colin Kaepernick set off a firestorm with his silent protest during the national anthem. It’s not about the fallout that has led to five years and counting of him not getting an offer from an NFL team.

This is about a mixed-race teenager from Wisconsin who was adopted by a white family as an infant and transplanted to Turlock, California, at 4 and how he came to terms with straddling worlds of white and Black. It’s also about so much more.

The notoriously press-shy athlete and activist rarely grants interviews but agreed to answer questions via email about his new Netflix limited series, “Colin in Black & White,” which premieres Friday. “I had important goals I wanted to achieve in telling this part of my story,” Kaepernick told the Los Angeles Times. “I wanted to create a scripted series around my high school years that addressed race and racism head-on.”

The show isn’t the NFL highlight-filled biopic one might expect. Its six episodes, co-created with Emmy winner Ava DuVernay, focus on teenage Colin (Jaden Michael), a three-sport star, as he comes to terms with his Blackness and struggles to be accepted as a quarterback. But as will surprise no one who has followed Kaepernick, who risked his career by kneeling during the pregame playing of “The Star-Spangled Banner” to protest the ongoing mistreatment of Black Americans, “Colin in Black & White” is anything but apolitical: The biographical narrative is accompanied by cinematically supple historical interludes narrated by Kaepernick and directed by DuVernay.

It wasn’t exactly the story DuVernay came in expecting to tell either. But she soon understood the force of Kaepernick‘s determination.

“He had a really clear idea about wanting it to stay in the land of young adulthood and not to move past high school,” says the director of “Selma,” “13th” and “When They See Us.”

“It took me a second to wrap my mind around that, to be honest. ... That’s not really my thing, telling the story of young celebrities’ lives, right? What was interesting to me is how those early years fit inside a larger cultural and political paradigm. What is the context for these actions of a young person, the experiences or the realizations he’s having? How does that connect into a larger conversation about race, class, culture, identity, all of that good stuff?”

Says Kaepernick: “The reason we focused on high school years is because they are pivotal in figuring out who you are, where you fit within society, and ultimately what your trajectory is going to be. It allowed us to dive into the complex racial dynamics of my family, my relationships and society.”

Series writer Michael Starrbury too had to find his way through to that focus.

“I went into it looking for a theme for myself and something that I could be excited about, or at least be able to relate to. I can’t relate to being a three-sport athlete. I can’t relate to having two white parents,” says Starrbury, who is Black. “But what I grabbed onto was the idea that, at that age, we always want to be something, but we may end up being something else.