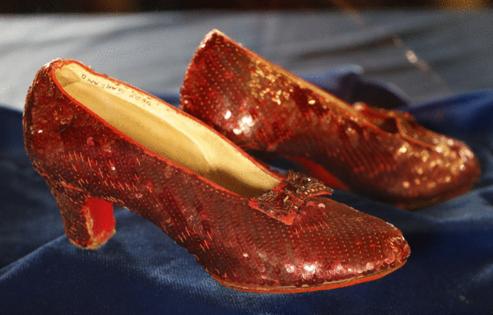 MINNEAPOLIS — Actor Melissa McCarthy freaked out over them in a recent TV special promoting the opening of the Academy Museum of Motion Pictures in Los Angeles. During his concert at Treasure Island Casino in Red Wing earlier this month, singer Christopher Cross joked that he contemplated stealing them from Liza Minnelli's house.

But few have been as obsessed with the ruby slippers from "The Wizard of Oz" as the two journalists behind a new podcast.

"There's No Place Like Home," an eight-part series from C13 Originals, focuses on the pair that went missing from the Judy Garland Museum in Grand Rapids, Minnesota, in August 2005. The shoes then mysteriously reappeared 13 years later during an FBI sting operation.

Seyward Darby, editor-in-chief of the Atavist Magazine, was mesmerized when she heard about the recovery and wanted to dive deeper.

"I was looking for a true crime story that didn't involve murder and dead girls," Darby said a few weeks ago from her home in Brooklyn, New York. "There's nothing really salacious in the slipper story and yet, it still has the cat-and-mouse qualities that lend itself to storytelling."

She quickly reached out to freelancer Ariel Ramchandani. Three weeks later, the reporter was making her maiden voyage to Minnesota.

"It was a really great reporting trip," Ramchandani said. "I'm a real New York City kid. I don't even drive. I really had to rely on the kindness of sources."

Over the course of three years of reporting, Ramchandani and Darby discovered enough suspects to fill an Agatha Christie thriller. Did memorabilia owner Michael Shaw arrange the theft to collect on the insurance? Was the late Kent Anderson, brother of Emmy-winning comic Louie Anderson, among the burglars? What role, if any, did high-powered Minneapolis attorney Joe Friedberg play?

The podcast doesn't provide any concrete answers — but it does reveal a lot about our fascination with certain aspects of pop culture. The series often wanders off the trail to educate listeners about the legacy of Judy Garland, who spent the first four years of her life in Grand Rapids, 180 miles north of Minneapolis. Her superstar life eventually unraveled under the influence of drugs and alcohol.

"It's interesting that this came out around the time Britney Spears is in the news," said Darby. "Judy was Britney before there was Britney. She was so famous when she was so young and had her life scripted and directed for her. All these people are making money off her talent and drive."

Early episodes also explore the enduring popularity of "The Wizard of Oz" and how the shoes became so iconic.

There are actually four sets of shoes in circulation that are believed to have been used in the 1939 film. The pair at the National Museum of American History in Washington, D.C., is among the most asked about artifacts in the entire Smithsonian collection. The one at the newly opened Academy Museum, which was donated for display by Steven Spielberg and Leonardo DiCaprio, is expected to draw the faithful.

"I think of those slippers as the Mona Lisa of our museum," Jacqueline Stewart, chief artistic and programming officer of the museum, said during a special that aired earlier this month on ABC.

Experts believe that the slippers in Grand Rapids are the ones Dorothy Gale used to click her way back to Kansas as she recited "There's no place like home." They are back on display, along with a carriage from the movie and an original script.

"People here still hold the ruby slippers dear to their heart," said Brian Mattson, an investigator for the Grand Rapids Police Department who was interviewed for the podcast. "The slippers came to symbolize a lot of different things for a lot of different people."

Other Minnesotans who pop up in the podcast include Grand Rapids Mayor Dale Christy and John Kelsch, former executive director of the Judy Garland Museum.

Ramchandani, who made three trips to Minnesota during the course of her reporting, conducted many of her interviews at local breweries and coffee shops. She was struck by the beauty of Pokegama Lake and the cooperation of Grand Rapids residents.

"I really liked the intimacy you get in a small town. Everyone knew each other," said Ramchandani, who ended up exchanging family photos by text with sources during the pandemic. "You'd be talking with someone, and they'd say, 'Oh, you should interview blah, blah, blah. Just go across the street.'"

Mattson said the response in his town has been mostly positive. Some of his fellow officers listened to episodes during their breaks at the station. No arrests have been made in connection with the theft. Mattson said the case is now in the hands of the FBI.

C13 Originals won't reveal how many people have tuned in throughout the rest of the country, but it's safe to say that the story has all the ingredients of a hit podcast. According to Edison Research, three of the top 10 podcasts of the past year were "Serial," "Crime Junkie" and "My Favorite Murder," all of which fall under the true crime genre.

At the very least, the podcast may inspire people to go back and watch "Wizard of Oz" for the umpteenth time. That's exactly what Darby did this past July.

"My husband fell asleep, but my mother-in-law and I were singing along to all the songs," she said. "One of the fascinating things about the movie is that it always feels a little different. It's the gift that keeps on giving."