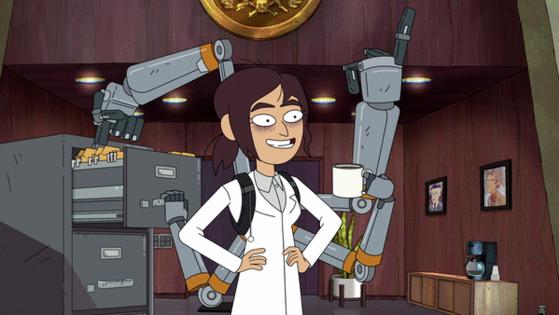 In "Inside Job," certain celebrities and politicians are revealed to be members of a race of shape-shifting lizard people that secretly live alongside humans. These reptoids help fund the work of the shadow government, which in turn ensures that the Earth stays at their preferred climate.

That's just one of the routine conspiracies being handled by Cognito Inc., a "company" enacting the will of a shadowy cabal of ancient elites who control the world. Created by first-time showrunner Shion Takeuchi, Netflix's latest adult animated series shows that even those coordinating cover-ups and surveilling the masses can't escape workplace mishaps and drama.

At the center of the show is Reagan Ridley (voiced by Lizzy Caplan), a brilliant but dysfunctional scientist who is ill-equipped to handle standard social niceties. As the series begins, Reagan is anticipating a promotion that would put her in charge at Cognito Inc. — though things don't turn out exactly as she hopes.

"The show is about Reagan's personal journey," Takeuchi said during a recent phone call. "The idea of someone who is extremely logical and pragmatic and working in a really cynical company that is the deep state, and still wanting to make the world a better place is an interesting irony.

"She is a character that doesn't sound, talk, look or act very much like a leader," she added. "I wanted to see, how does one become a leader in those instances?"

Despite the ways that once-fringe theories have increasingly spread into the mainstream in recent years, "Inside Job's" timely arrival is more of a coincidence. The long production timeline involved in animation meant Takeuchi was developing the core concepts of the show before debunking conspiracies became a routine necessity of the news cycle.

"I didn't love it," Takeuchi said of watching conspiracy theories becoming more prevalent. "It's been a wild ride watching all this stuff unfold. I'm having the same experience as anyone else. But I guess it's confirmation that we've all been feeling kind of similar things in the zeitgeist."

"To be clear, I don't actually think there is a shadow government," said Takeuchi, whose previous credits include writing on the series "Gravity Falls" and "Disenchantment." "I just want people to know where I stand on that one."

Takeuchi first encountered the concept of a "shadow government" as a college student when she discovered the online archives of the late-night paranormal radio show "Coast to Coast AM." Initially, she found the idea of "a secret group of people in the true seat of power playing fourth-dimensional chess with the world" terrifying.

"If you believe that you have no agency in the world, how can you believe in anything [or have] any kind of social trust?" said Takeuchi.