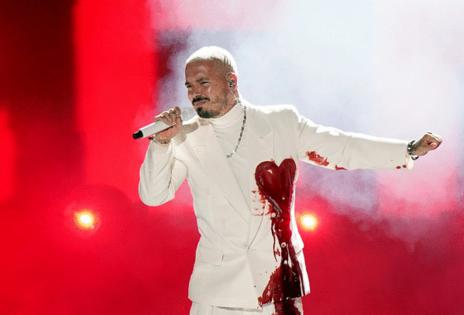 Colombian reggaeton artist J Balvin apologized on Sunday for the content of the music video for his latest hit “Perra,” days after quietly removing it from YouTube amid accusations it was racist and misogynistic.

“Perra” means female dog, with its Spanish vernacular connotations matching the English. The song is a lust-infused lyrical journey about two people seeking each other “like a dog in heat... Looking for a dog to hit it.”

There had been calls for Balvin to make a statement after pulling the video, which featured 25-year-old Dominican rap star Tokischa, a Black woman, and others leashed on all fours against lyrics depicting them as dogs in heat. Tokishca was also seen eating fried chicken and cereal from a dog bowl while on all fours in an actual doghouse.

“I want to say sorry to whomever felt offended, especially to the Black community,” Balvin said on Instagram Sunday. “That’s not who I am. I’m about tolerance, love and inclusivity. I also like to support new artists, in this case, Tokischa, a woman who supports her people, her community and also empowers women.”

Tokischa expressed regret for how the video had been interpreted but said it had been “conceptual,” with the idea of reinforcing the track’s wordplay.

“If you, as a creative, have a song that’s talking about dogs, you’re going to create that world,” she told Rolling Stone. “I understand the interpretation people had, and I’m truly sorry that people felt offended. But at the same time, art is expression. It’s creating a world.”

“As a form of respect, I removed the video eight days ago,” Balvin noted on Sunday. “But because the criticism continued, I’m here making a statement.”