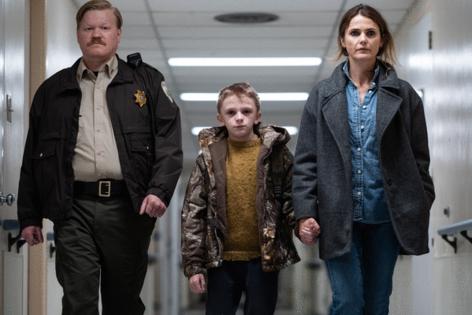 Filmmaker Scott Cooper, known for his films of rugged masculinity, including “Out of the Furnace” and “Hostiles,” makes his first foray into the horror genre with the creature feature “Antlers,” co-written with C. Henry Chaisson and Nick Antosca, and produced by monster maestro Guillermo del Toro. Twice delayed by the COVID-19 pandemic, there’s been a sense of almost impossible anticipation around the film, and while it finally lands in theaters just in time for Halloween, it turns out that the wait wasn’t worth it for this exceedingly grim horror fable.

Adapted from a short story, “The Quiet Boy,” by Antosca, the setting of “Antlers” has been moved from West Virginia to a foggy small town in Oregon. While the mythology and psychology remains frighteningly vague in Antosca’s story, in the film, it’s made more explicit, to largely frustrating results.

Our heroine is Julia (Keri Russell), who has returned home to Oregon to live with her brother, Paul (Jesse Plemons), the local sheriff, after the death of their abusive father (a subplot that’s provocatively presented and then abruptly dropped). As a teacher at the local elementary school, she takes a special interest in one of her students, Lucas (Jeremy T. Thomas), a bullied boy who is seemingly suffering from neglect. Lucas writes terrifying fairy tales with accompanying illustrations, depicting the harrowing lives of Big Wolf, Middle Wolf and Little Wolf.

Worried about his welfare, and especially interested in saving a kid from an abusive situation, Julia follows Lucas around town and visits his home looking for his father, Frank (Scott Haze), and younger brother. In poking around trying to save a vulnerable kid, she unwittingly unleashes an ancient evil, which had only been precariously kept at bay by young Lucas’ efforts.

“Antlers” is an adaptation of an indigenous First Nations myth, the tale of the wendigo, which is described by the former sheriff Warren Stokes (played by Canadian First Nations actor Graham Greene). This mythical creature offers the opportunity for shockingly gory body horror, and in “Antlers,” it’s also used as a metaphor for the social ills that plague this town.

The monster, noted for its insatiable hunger, represents the opioid epidemic that has this rural area in its grip, including Frank, who we first meet scrapping metal from a local mine for drug money. But the symbol of this insatiable creature is also used in employ of commentary on the local coal mining industry, which has been fired back up under lax Trump-era environmental regulations. Or perhaps the metaphor is about intergenerational trauma passed from parent to child through abuse. In “Antlers,” it’s all of the above.

While Cooper worked with an indigenous filmmaker, Chris Eyre, as a consultant on the film, it does rankle that this indigenous myth has been used to center a story about the issues plaguing white men, while indigenous characters remain on the margins of this story. As the film progresses, it’s an irritant that’s hard to shake.

The horror craft on display is shockingly gory, the dark and dim cinematography by Florian Hoffmeister almost punishingly creepy. Thomas, as Lucas, is astonishing in a role that makes you worry for his own well-being, and while Russell and Plemons are fantastically embodied actors, they remain in the same dour register for the entire film. But “Antlers” is such a slow burn that at times it grinds to a halt. This dark and dreary monster movie is indeed horrific, but it’s also undoubtedly a downer, for more reasons than it was likely intended.

MPAA Rating: R (for violence including gruesome images, and for language)