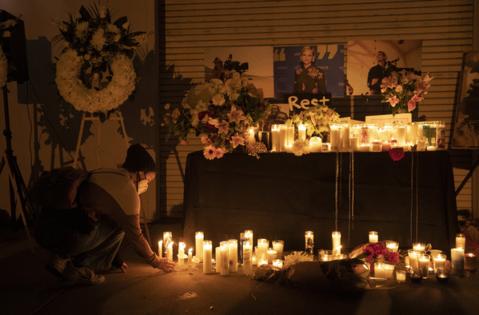 The fiancee of late actor Brandon Lee described the “shock and grief” she felt following his death on a movie set in 1993, and called for change after a cinematographer was fatally wounded last week while making “Rust.”

Lee died in a shooting incident on the set of “The Crow” after being hit by a dummy bullet while performing a scene involving a gun.

“Twenty eight years ago, I was shattered by the shock and grief of losing the love of my life, Brandon Lee, so senselessly,” Eliza Sutton told People.

“My heart aches again now for Halyna Hutchins’ husband and son, and for all those left in the wake of this avoidable tragedy.”

“Rust” star Alec Baldwin was practicing a scene in which he drew a prop gun last Thursday when the firearm went off, striking Hutchins, the film’s director, Joel Souza, told investigators in an affidavit.

Assistant director Dave Halls told authorities last week that he didn’t realize the gun was loaded when he gave it to Baldwin.

Baldwin said he is fully cooperating with authorities during an investigation.

Sutton told People following Thursday’s incident, “I urge those in positions to make change to consider alternatives to real guns on sets.”

Earlier this week, Sutton wrote on her private Instagram page, “There’s no such thing as a prop gun,” according to People.

Lee, who was the son of actor and marital artist Bruce Lee, was 28 when he died.