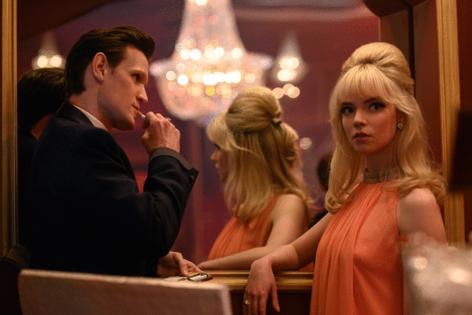 The menace in Edgar Wright's "Last Night in Soho" starts early and slowly. You begin to worry for Eloise (a wistful, sweetly rabbity Thomasin McKenzie), a young woman from Cornwall, the minute she arrives in London to attend fashion school. Her cabdriver at first seems kind and helpful — and then he starts talking about her appearance, making jokes about stalking, getting personal in a way that makes Eloise run from the cab before her destination. London, it seems, has danger around every corner; it's both thrilling and very scary indeed.

And that's a reasonable description of Wright's film, an inventive, intricate and occasionally very bloody tale of two women. One is Eloise, a talented designer obsessed with the music and fashion of the 1960s who's still so young and unformed she's not sure if she wants to be called Eloise or Ellie or Elle. The other is Sandie (Anya Taylor-Joy of "The Queen's Gambit"), a glamorous if indistinct party girl who dreams of stardom as a singer or actor or something, and floats into Soho nightclubs like she's barely touching the floor.

Teased by the mean girls at school, Eloise is fascinated by Sandie. When she's alone, as she often is, she pulls her lips down in the mirror in an imitation of Sandie's pout. She tries a flip line of Sandie's out on a nice classmate (Michael Ajao) in an attempt to sound cool (it doesn't work); she designs a mod '60s shift dress in class, drawing Sandie's face on her sketches.

I don't want to get into detail as to how exactly Eloise and Sandie meet; part of what's riveting in "Last Night in Soho" is watching the two women connect and seeing them eerily mirroring and overlapping each other — and wondering exactly where Wright is taking this story. (Note some beautiful camera work featuring Eloise and Sandie in nighttime Soho; in particular, a later scene in a cab where Eloise lingers like a delicate ghost in the window.) As Eloise gets pulled more into Sandie's life, things get progressively darker, and the film becomes a cautionary tale about the dangers of idealizing a time and place, and about female rage.

Though Wright can't quite sustain the tension through the final half-hour, "Last Night in Soho" is full of dark pleasures (the fashions alone, not to mention Terence Stamp's brief and devastatingly creepy smile, will haunt your dreams). And it features a melancholy gift: the final screen appearance of Diana Rigg, who died a year ago. Once the toast of '60s London in "The Avengers," she slyly plays Eloise's seen-it-all landlady — one last night on screen, you might say, over too soon.