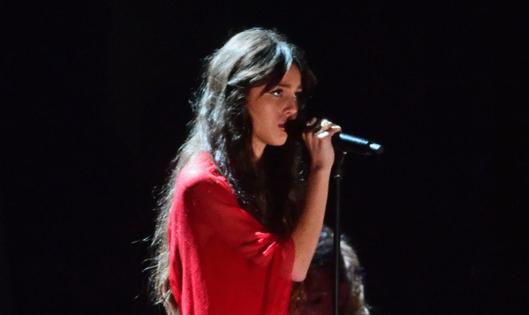 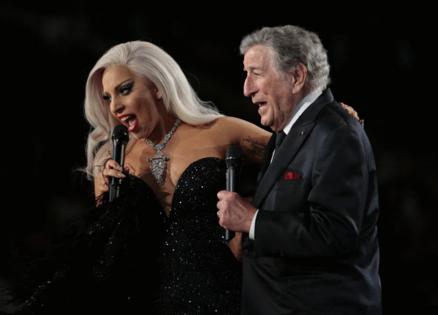 LOS ANGELES — You can almost picture it: Tony Bennett, beaming and crinkly-eyed at age 95, shuffling slowly to the podium with help from Lady Gaga as the in-house band strikes up one of the indelible Cole Porter numbers from their latest collaborative LP. "Love for Sale," as it's called, has just been named album of the year, and now — before an arena full of stars, including a teary-eyed Taylor Swift, and with millions tuned in at home — it's time for Gaga to pay tribute to her legendary friend with Alzheimer's disease.

An improbable scenario at next year's 64th Grammy Awards? Perhaps. But given the Recording Academy's long-established weakness for old-timers and cross-generational hookups — think Robert Plant and Alison Krauss winning album of the year in 2009, or Herbie Hancock doing it in 2008, or Natalie Cole and her late father, Nat King Cole, in 1992 — an emotional Gaga/Bennett victory could make for an elegant solution to what feels like the lack of a clear front-runner for pop music's most prestigious prize.

It's the always-unpredictable Grammys, said one music-industry insider, adding with a laugh, "I could see it happening."

With first-round voting having opened Friday, Swift, Billie Eilish, Olivia Rodrigo and Lil Nas X are all but certain to fare well in nominations set to be announced Nov. 23. (Eligible recordings had to be released between Sept. 1, 2020, and Sept. 30, 2021; the 64th ceremony itself will take place Jan. 31 in Los Angeles.) Yet for varying reasons, none of them seems like a lock for album of the year — which leaves that long-shot opening for the feel-good odd couple with the sure-to-stop-the-show acceptance speech.

For the academy, a throwback win for "Love for Sale" would also serve as a welcome reminder of a simpler era, back before the Grammys became the cultural and political flashpoint they often resemble today.

The 2021 ceremony, held later than usual in mid-March due to pandemic-related delays, was shadowed by allegations of corruption from the Weeknd, who publicly criticized the academy after his smash "After Hours" album failed to receive a single nod; his comments echoed those of other high-profile Black artists, including Frank Ocean and Drake, who've highlighted concerns about systemic racism in the Grammys' nominating process, and of Deborah Dugan, the academy's former CEO who was ousted in 2020 after making explosive claims regarding vote-rigging, discrimination and sexual misconduct.

In response, the academy recently announced that it was doing away with its controversial nominations review committees — small groups of music-business insiders who oversaw, and sometimes amended, the Grammys ballot after the academy's thousands of voters had made their initial choices — and had parted ways with chief awards officer Bill Freimuth, who supervised the committees. (Many concluded it was a committee that had iced out the Weeknd as a result of some behind-the-scenes conflict.)

The news was received as a sign of longed-for transparency, though, as one prominent industry executive pointed out, a clean vote may only reveal an underlying issue. "The academy has a serious membership problem," said this person, who, like others, requested anonymity in order to speak freely about awards they'd still like their artists to win. "There's nowhere near as much diversity as there needs to be." Added a veteran major-label exec: "If you're truly relying on the voters" — a group of approximately 12,000 widely thought to be dominated by older white men — "you might end up with another Jethro Tull situation." (In 1989, the flute-blowing British band infamously beat Metallica for the hard rock/metal performance Grammy.)

"It's possible the committees saved the academy from embarrassment more than they created it," this person said.

Since he took over from Dugan last year, academy chief Harvey Mason Jr. has earned reserved praise for attempting to diversify the organization's membership. Yet the group found itself in hot water again this month when word got out that Kacey Musgraves' pop-leaning "Star-Crossed" had been barred from consideration in the country album category, ostensibly because it's not country enough. The ruling — made by a so-called screening committee that decides whether certain albums or songs qualify for certain genre awards — raised familiar questions about conflicts of interest inside the academy and newer ones about who's tasked with policing genres and who loses in that process.