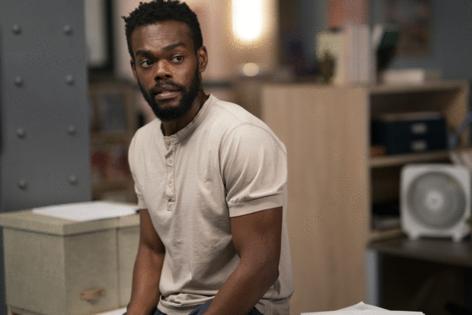 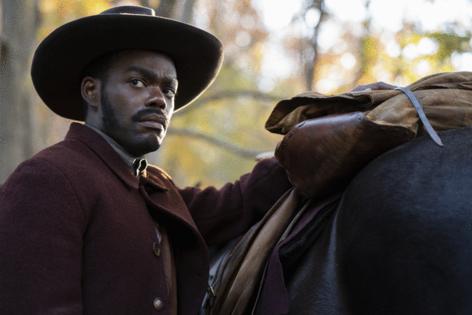 As recently as five years ago, William Jackson Harper's career goals were simple: He wanted to reach a level of success where he wasn't worried about rent or in need of several roommates.

To be where he is now — in London, shooting a film he can't discuss, no really, not at all — is, to his mind, a wild turn of events.

Until 2016, when he landed the role of Chidi Anagonye, the endearingly indecisive and anxious former ethics scholar, on NBC's "The Good Place," Harper was the definition of "working actor," competing for on- and off-Broadway roles and landing guest spots on shows like "Law & Order: Criminal Intent" and "30 Rock."

"Just before booking 'The Good Place,' I was at this place in my career where I was like, 'I'm not sure that I like this anymore,'" he says. "'I'm not sure having several roommates and living paycheck to paycheck and being in my mid-30s and wondering, "Is this what my life is going to be forever?" is it. Where I'm just always a little bit scared about rent, and I can never take the vacation, or I can never visit home for weddings or a funeral. I can't do any of the normal stuff people do in life because I have to make sure I'm making money to get to next month and also auditioning enough to get the job that will give me the money to get to next month.' I was always just a little bit freaked out."

He hoped that Chidi and "The Good Place" would result in steady work for a season, at most. The series lasted four and gave him the momentum to snatch up roles in the 2019 films "Midsommar" and "Dark Waters."

So Harper, 41, can breathe a little easier now.

Not only is he appearing in a secret film project, but he's also headlining the new season of HBO Max's anthology series "Love Life." Premiering Thursday, the show explores the ups and downs of adulthood and the romantic escapades that present themselves along the way.

It follows other recent projects that have placed Harper in leading-man territory. Earlier this year, he gave a soulful performance as a freeborn Black man in pre-Civil War America who has a sweeping romance with a runaway slave (Thuso Mbedu) in Barry Jenkins' limited series, "The Underground Railroad"; he also starred in the film "We Broke Up," about a couple who call it quits but pretend to still be together to fulfill a wedding obligation.

"I never thought that being the central character in anything on-screen was in the cards for me," Harper says. "I always figured, at best, I'd get to be a really strong left-of-center supporting character. That was where I thought the journey ended for me. I still would love to play those roles too. But I never saw this side of it for me. And I like it. I feel like I'm reading a book where every time I turn a page, it's empty and being written right in front of me a little bit. And there's possibility."

It's just past 10 p.m. in London, and although Harper began the Zoom conversation resting his head on his hand, he grows more animated as he considers how a life spent chasing down opportunities has resulted in him reaching ones he didn't think were possible.

In the new season of "Love Life," Harper carries the lead baton passed on by Anna Kendrick in Season 1. He plays Marcus Watkins, a 30-something book editor who dives back into the dating pool after blowing up his marriage in ways only he didn't see coming. The story follows Marcus over several years as he floats in and out of relationships while in various stages of self-discovery.

"It is more than just a story of dating and romance. It's really just a story of a person growing up," says Harper, also an executive producer. "There's so many changes that happen in those years, in your 20s and early 30s. You become — at least I became — a very different person from when I first moved to New York to now. And I feel like a big part of that growing up, a big part of that change, comes from the people you date. And sometimes it's funny, and sometimes it's really uncomfortable and sometimes it's messy."

Harper knew that with a series that revolves around dating, showing a bit of skin was to be expected. He's been the subject of thirst tweets before; when Chidi went shirtless on "The Good Place," showing that the philosophy nerd had a surprisingly buff physique underneath his sweaters, Twitter exploded. Still, the call to show his body provokes a very specific kind of dread.

"I was terrified of taking my shirt off [on 'The Good Place'] because I'd always been made fun of as a kid," Harper says. "And as I've gotten older, and especially as I started to work on TV, I started working out a little bit more and trying to eat a little bit better. Working out was something that was very meditative for me, and I really enjoyed it. But when I got that script, I definitely ramped it up. I found myself at the gym at 5 a.m. before going to set.

"I was fully prepared to just get made fun of and roasted. I do think a lot of dudes have some sort of body dysmorphia, body issues and a lot of fear around it. Men are mean to each other. When I have a show that requires me to take my shirt off, it's a highly regimented, sometimes destructive process that I go through to get to a place where I feel comfortable with my body."

To add a level of connection to the character, Harper visited the writers room a few times to share his own mistakes and the questionable decisions he's made in relationships, but he's careful to note: "Marcus' journey is not my journey."

Co-showrunner Sam Boyd agrees, sort of. With Harper, he says: "You feel like you're watching a movie star and a real person at the same time, which seems kind of contradictory, but you're like, 'Oh, this is like a real guy in the world, and he also has this incredible gravitas and this incredible kind of star power and charisma.'"

For nearly a decade, Harper's own love story has been strong and steady. His partner is Ali Ahn ("Billions," "Orange Is the New Black"); both were in relationships when they began doing theater together in New York. Eventually, they starred in a production of "Romeo and Juliet"; both single by then, "it just spiraled up into the sky from there." (Kristen Bell, his former co-star on "The Good Place," points out that another piece of Harper's heart is slightly less romantic: "He loves his dog Chico to pieces and would often make up songs about Chico and sing them to us on set.")

"I feel like I sort of took some lumps for a long time in my career, so with all the things that are happening now, like, when I get to go to those big fancy parties and stuff, it still feels really alien," he says. "I'm not in my element, and I'm sort of waiting for a suitable time to escape and just go hang out with Ali and just be in a dive bar."

Harper was raised in the Dallas suburbs. He was 8 when his father, a computer operator for a power company, died. His mom, an executive assistant until Harper was in middle school, went back to school to get a nursing degree.

"There was a time where all of us were in the house doing homework," Harper recalls. "She was just pounding Dr Pepper and studying — and so was I, and so was my sister. The three of us just three students in the house. My mom gave up a lot and put up with a lot to give us options."

He wasn't a child who showed early signs of being a performer. He took theater in middle school only because his mom made him — an attempt to get the shy kid out of his shell. "I thought it was corny. I thought it was going to be a whole lot of getting down on one knee in front of a balcony wearing some stockings and some pumpkin pants — I wanted nothing to do with that."

Eventually, however, that ambivalence turned to admiration; acting not only brought him out of his shell but it also became a passion that fulfilled him.

"I just wasn't interested or excited by the same things as kids in my grade," Harper says. "I didn't care about homecoming or school spirit stuff. It wasn't like an anti thing. I just wasn't invested in it. ... But [theater] was something I was good at in school. I'm not athletic, I'm not the best student. Theater made me feel special. And you need something that makes you feel a little special at that time in life, something to find yourself in."

After graduating from the College of Santa Fe in New Mexico, he moved to New York, working flexible jobs — waiting tables (poorly, he adds), working the concession stand at Broadway theaters, stuffing envelopes as a temp — to sustain him in his anxious pursuit of becoming a working actor, always aware that success could fall away just as magically as it was achieved.

Maybe that's why Harper's peers sense both ease and intensity in his work ethic.

"He has such ease as an actor. He is one of those people you think might have been born to do it," Bell says. "He is very hard to throw off his game. But he also makes some of the most outrages outrageous choices I have ever seen made by an actor; particularly when choosing the volume or tempo with which he delivers a line, but somehow they work every single time."

"He's a very methodical and very cerebral performer," is how Jenkins describes Harper. "Once he gets a full understanding of the character, then he kind of becomes more instinctive, like he's moving on intuition.

"I don't know if you've met him in person, but he's kind of an old dude. I don't mean his age; he's my age. He just feels like an old dude. Like in 'Do the Right Thing,' when all the cats are sitting in front of the corner store — William reminds me of those dudes, in his aura, in his personality."

Harper's just happy to leave an impression. Whatever this secret film turns out to be and with whomever he teams up next, it's clear he's enjoying this moment.

"Getting to work with these people I've watched from afar for so long is a privilege that is not lost on me," he says. "It feels like midnight on Christmas Day when you were a kid, but like all the time. I've got these new toys I keep opening up, and I don't want to put them down."