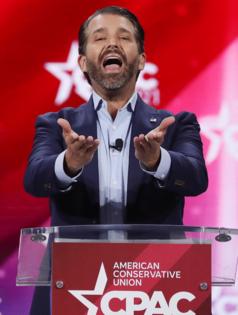 A tee declaring “Guns Don’t Kill People, Alec Baldwin Kills People” is selling for $27.99 on a merchandise site linked to the former president’s namesake son. The reference is to the Thursday slaying of cinematographer Halyna Hutchins, who was hit by discharge from a prop gun while working on the Baldwin film “Rust.”

Baldwin, the film’s star, was handling the weapon from which the fatal shot was fired. The movie’s director was injured as well.

Trump Jr.’s merchandise site also sells shirts that read “My God, My Family, My Guns & My Freedom.” The 43-year-old scion is a vocal gun advocate who frequently poses with firearms and posts photos of animals he’s killed. Last year, he hosted an Alaskan hunting trip to raise money for Safari Club International.

The T-shirt Trump Jr. is pushing is in line with anti-Baldwin comments the former reality TV judge made on social media over the weekend. He suggested Sunday that Baldwin, a politically active progressive, would blame the gun for Hutchins’ being shot. Some like-minded Instagram users weighed in to suggest — without any evidence — that the killing was no accident.

Trump Jr. stuck to his guns amid criticism the T-shirt was in poor taste.

“Screw all the sanctimony I’m seeing out there,” he said on Instagram. “If the shoe was on the other foot Alex (sic) Baldwin would literally be the first person p--sing on everybody’s grave trying to make a point. F*ck him!”

As of Monday former President Donald Trump, who announced last week he was launching a new social media platform, had not commented on the matter.

But some right-wing pundits teed up on Baldwin after Hutchins’ death. Commentator Candace Owens accused Baldwin of the “murder” of “innocent people,” which she later corrected.

GOP Congresswoman Lauren Boebert of Colorado and Republican Senate candidate J.D. Vance of Ohio mocked Baldwin, with the latter asking that Donald Trump be reinstated on Twitter so he could address his TV tormentor.