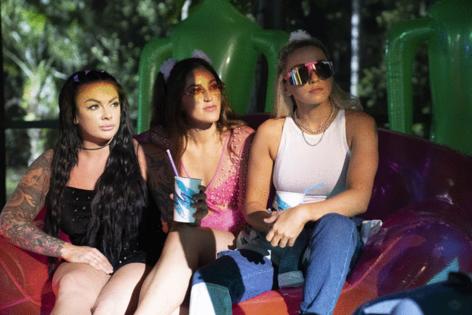 As one cast member put it, “Everybody knows everybody. Everbody’s dated everybody.”

The eight-episode docuseries, filmed around Tampa Bay, comes to Prime Video on Nov. 5. What can we expect?

Executive producers Melissa Bidwell and Paul O’Malley chatted with the Tampa Bay Times over Zoom about the upcoming show. Here’s what they want viewers to know:

The Baes all knew each other before filming

The unscripted reality show follows a preexisting group of 12 friends, all of whom identify as lesbians.

“Lesbians are overdue, even though we all love "The L Word" and that paved the way,” O’Malley said.

“We feel like Tampa is a great backdrop and a hidden gem for the LGBTQ+ community.”

Two of the cast members, couple Haley and Brianna, reached out to O’Malley in the December before the pandemic to suggest a show about their group of friends. The women range from their early 20s to early 30s, and each lives around the Tampa Bay area.

“We have some close to downtown, some further out east in Brandon, a few St. Pete ones, some up north,” Bidwell said.