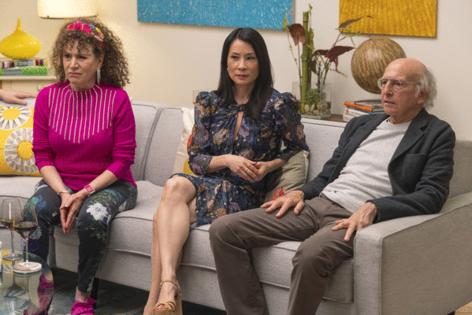 HBO didn't provide screeners for Season 11, but it's safe to assume that creator Larry David won't let us down. Even at his weakest, David's discomfort has given us comfort. And if we ever needed our Curmudgeon-in-Chief, it's now. While the story line remains a mystery, we do know that Albert Brooks, Kaley Cuoco, Jon Hamm, Bill Hader and Lucy Liu are all on board. Pretty, pretty good. 10:40 p.m. ET Sunday, HBO

Aliens are attacking the Earth. Again. The twist this time around is that Armageddon might be the best thing to happen to the mopey main characters. There's the Afghan nomad mourning the death of his daughter, an Oklahoma sheriff regretting his retirement and a New York mom who just discovered her husband is having an affair. We don't actually see the aliens in the first three episodes, but don't be surprised if they end up resembling angels of mercy. Apple TV+

Congress should ban any more "Sex and the City" reboots and force all its fans to get on the "Insecure" train. The friendship between Issa (co-creator Issa Rae) and Molly (Yvonne Orji) is more real — and hilarious — than any bond between Carrie Bradshaw and her gal pals. The characters in the fifth and final season are more mature than when we first met them, but they still make their fair share of figurative pratfalls. 10 p.m. Sunday, HBO

This new animated series imagines that there really is a Deep State. Lizzy Caplan voices the main character, a power-hungry scientist whose idea of bliss is constructing a fake president. Too many of the episodes hinge on the same plot twist — killer robots run amok — but conspiracy-minded viewers will be relieved to find that someone is on their side. Netflix

Stephen Ives, who played a key role in bringing Ken Burns' "Civil War" to the screen, created this four-part tribute to the military, particularly those who have enlisted in the past 50 years. Some of the most powerful testimonials come from vets who have never before spoken of their experiences. But the project isn't purely patriotic. Ives and his team take a hard look at the history of sexism and racism in the troops. Drew Carey, Wes Studi and Sen. Tammy Duckworth are among the narrators. 9 p.m. Tuesday, PBS; new episodes every Tuesday through Nov. 16