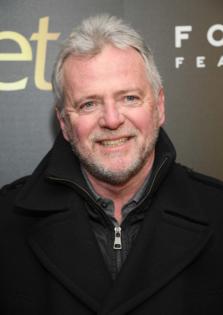 Quinn is in the midst of a busy stretch, starring as Theodore Roosevelt on the new history series “The American Guest” and also making an appearance on Thursday's milestone 500th episode of “Law & Order: Special Victims Unit.”

“It’s great to be back on the boards again and working, and getting to promote stuff that I love that I did,” Quinn told the Daily News.

The four-part “The American Guest,” now streaming on HBO Max, centers on Roosevelt as he explores an uncharted stretch of the Amazon alongside Brazilian army officer Candido Rondon in 1913 and 1914, and depicts the dangers that ensue during the journey.

Quinn considers playing the 26th U.S. president to be one of the best roles of his career, and wanted to convey Roosevelt’s passion for life and determination to fight for the rights of women and workers.

“When I got the script, I immediately drowned myself in every biography, every audio book, every piece of videotape of him walking,” Quinn, 62, explained. “There are a few recordings of him, so I would be playing them continuously. And I did that even toward the end. Throughout the shooting, I was still doing it.”

The actor put on 25 pounds and wore molded teeth to better embody Roosevelt, and worked to capture the politician’s dialect.

Quinn believes the importance of taking care of nature is the “ultimate lesson” of Roosevelt, who founded five national parks, 150 national forests and more than 230 million acres of public land.

“The story is just so remarkable, and it had so many issues that I think are prevalent today,” said Quinn, referencing Roosevelt’s feelings about nature and the environment.

Quinn was also excited for audiences to watch his guest role on “Law & Order: SVU,” which aired Thursday.

The series’ 500th episode introduced Quinn’s new character as someone with a past connection to Olivia Benson, portrayed by star Mariska Hargitay.

“I’m an old friend of Mariska’s (character) who brings her a cold case, and then some things happen between us that rekindle our old relationship,” Quinn said. “I gather there hasn’t been too many of those, if any, in the 23 years she’s done the show. They were very intense scenes. She’s an absolute joy to work with.”

The roles are the latest in a career that’s spanned four decades and seen Quinn earn nearly 100 on-screen credits, including playing Capt. Thomas Gregson on all seven seasons of “Elementary.”

Quinn, who received Emmy nominations in 1986 for “An Early Frost” and in 2007 for “Bury My Heart at Wounded Knee,” also has the action film “Blacklight” out in February, playing the head of the FBI alongside Liam Neeson.

In addition to his starring role on the screen, Quinn served as an executive producer on “The American Guest.” He described playing Roosevelt as “a thrill and an honor.”

“It was great to have a role that used every ounce of me,” Quinn said.