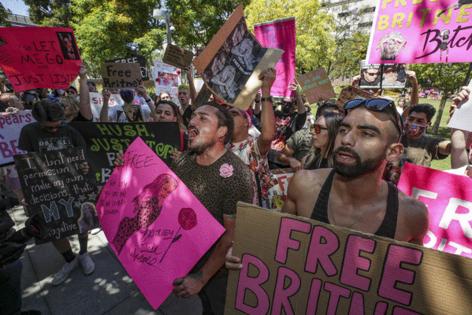 After being suspended as the conservator of his daughter’s estate last month, Britney Spears’ father, Jamie Spears, has hired a new litigation attorney.

Wyle notified the court earlier this month that she won’t be available for most of October.

“We are proud of our work on behalf of Jamie Spears and stand by his and our actions,” Thoreen said Thursday in a statement to the Los Angeles Times. “We continue to have a good relationship, and are pleased that we have been able to help Jamie find new counsel. I am confident that Jamie’s new counsel will continue to prove that he has always acted in Britney’s best interests every step of the way.”

Weingarten did not immediately respond Thursday to the L.A. Times’ requests for comment.

The next hearing in the protracted case has been set for Nov. 12. It’s expected to focus on the potential termination of the conservatorship, which began in 2008 after the entertainer struggled in the public eye. The singer, 39, made an impassioned plea in court in July to end the legal arrangement, and her father, 69, requested to end it in September.

The “Baby... One More Time” singer has been vocal in court about pushing her father out of the conservatorship in recent years, while the fan-fueled #FreeBritney movement has called for his ouster for much longer.

Jamie Spears’ latest move comes amid repeated assertions by his daughter’s attorney, Mathew Rosengart, to look “into the misconduct of Jamie Spears and others” as they try to untangle the pop star from the legal arrangement, known as a guardianship in other states. Rosengart has said Britney’s father and others would face “even more serious ramifications” for their alleged misconduct.

Last month, a judge appointed certified public accountant John Zabel as the interim fiduciary advisor and temporary conservator of Spears’ lucrative estate, booting the elder Spears from his long-held role over the entertainer’s finances and ordering Spears to hand over all assets to Zabel.

“I do believe that the suspension of James Spears as conservator … is in the best interest of the conservatee,” Judge Brenda J. Penny said at the Sept. 29 hearing. “The current situation is not tenable. It reflects a toxic environment, which requires the immediate suspension of Jamie Spears today.”

Jamie Spears stepped down from the separate role of conservator of her person in 2019, and Jodi Montgomery has remained the pop star’s longtime care manager since.