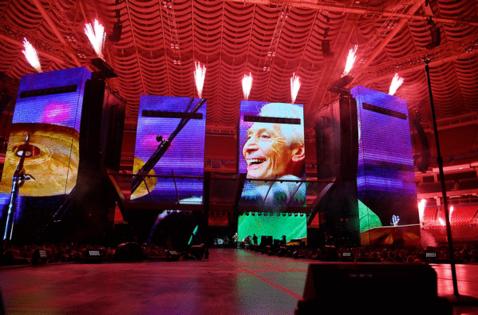 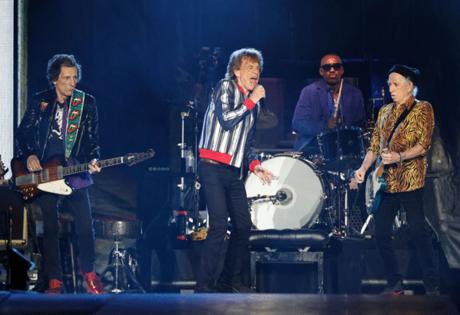 MINNEAPOLIS — The Who did it. ZZ Top did it. Now the Rolling Stones are doing it.

It's one thing to continue with replacements. It's another thing to do so after the sudden death of a key longtime member, as ZZ Top did this summer following the passing of founding bassist Dusty Hill.

"I don't really fault them for keeping keeping on," said longtime Stones fan Mike Elias, co-owner of Barely Brothers Records in St. Paul, pointing out that Sunday's concert at U.S. Bank Stadium is a makeup for last year's COVID-postponed date. "Mick [Jagger] is a businessman as much as he is a rocker. I'm a huge Stones fan. I'd like to see them again."

Not surprisingly, their No Filter Tour — the Stones' latest "this could be the last time" trek — grossed a hefty $415 million in 45 concerts from 2017 to 2019 before a pandemic hiatus.

Well traveled drummer Steve Jordan was already slated to fill in for Watts, who had undergone an undisclosed medical procedure, for 13 makeup concerts in the United States. Three weeks after that announcement, Watts died.

"I'd rather not have this be the case," Jordan told Vanity Fair. "But the Rolling Stones have really, really done everything in their power to make the transition smooth and sympathetic and empathetic."

This is not the first change for the Stones. In 1969, they fired founding guitarist Brian Jones, who drowned less than a month later. His replacement, Mick Taylor, quit after six-plus years to be succeeded by Ronnie Wood. Original bassist Bill Wyman left in 1993, with Darryl Jones taking over.

But for 57 years, the Stones never played a gig without Watts.

"When you're a band for this long, it's unlikely you won't have any changes," Jagger told the Los Angeles Times recently. "Of course, this is probably the biggest one we've had. But we felt — and Charlie felt — that we should do this tour. We'd already postponed it by a year, and Charlie said to me, 'You need to go out there. All the crew that have been out of work — you're not gonna put them out of work again.' So I think it was the right decision to keep going."

Can they still call themselves the Rolling Stones without Watts, long considered the band's soul?

Most bands stick with the brand name that will sell the most tickets. Van Halen didn't miss a beat replacing singer David Lee Roth with Sammy Hagar. The Who forged ahead after the deaths of drummer Keith Moon in 1978 and bassist John Entwistle in 2002, Fleetwood Mac has had a revolving door of guitarists and lead singers and still enjoyed blockbuster business. The Eagles have had four different lead guitarists and two bassists and continue to sell out concerts.

The Grateful Dead may be the most high-profile act to change its moniker after the death of a defining member. When singer-guitarist Jerry Garcia passed in '95, the survivors began calling themselves the Other Ones. Then they became simply the Dead, and now, with the addition of John Mayer, Dead & Company even though each incarnation has pretty much played a similar repertoire.

Soul Asylum considered billing itself as "Dave Pirner," for its frontman, after the retirement of founding guitarist Dan Murphy, said drummer Michael Bland.

"Management said: Don't bother," recalled Bland, the former Prince sideman who is Soul Asylum's fifth drummer. "No matter what you call it, it's going to be the same music. Dave wrote it. As long as the band performs it well, I don't see why anybody should have a problem."

Longtime Twin Cities rocker James Walsh knows about a name change. After his Minneapolis-launched, L.A.-based prog-rock group Gypsy disbanded in the mid-'70s, he returned to Minnesota and restarted the band as James Walsh Gypsy Band, playing both old and new material.

"The loyalty here for Gypsy is crazy," said Walsh. "People have accepted me as the leader and lead singer. It's the songs. These people sing along, they know the lyrics, the licks, they know everything about Gypsy."

Even though Don Henley declared the Eagles were history after the death of co-leader Glenn Frey in 2016, he revived the band a year later with two new faces, country superstar Vince Gill and Frey's son Deacon. The group seems not so much resurrected as refreshed. It packed Xcel Energy Center for two nights this month.

Fans there and at a recent concert by ZZ Top in Wayzata didn't seem to mind the revamped lineups.

"It's different but it's OK," Susie Brady of Bloomington said about seeing ZZ Top, a trio that had been together for 52 years without a personnel change. (Hill has been replaced by the band's longtime guitar tech Elwood Francis, reportedly with Hill's blessing.)

Peter Olsen of Minneapolis was sad that Frey died, but as a Gill fan, he was excited to see the Eagles. "They can still play," he said. "You love the originals, but it's not forever."

Dave Lindholm of Eden Prairie said he was glad to see the Eagles, and stoked to go see the Stones: "It's different, but I'd rather see them than not see them," said Lindholm, a 34-year-old guitarist.

Stones superfan Jon Clifford, who has seen them 15 times, hasn't secured a ticket for this tour.

"When you lose somebody as integral as Charlie, then maybe it's time to move on and do some other things. My hope would be they hang it up as the Stones," said Clifford, proprietor of HiFi Hair and Records in Minneapolis. "Whether they go out individually or collectively as something else. I'd rather see them go out on top than fizzle out.

"They're on that brink. I had such a great time last time around [in 2015 at TCF Bank Stadium] and I was in the fifth row, it's hard to top that."

Bland can see both sides of the argument — retire the moniker vs. press on — but believes that "ultimately, the public decides."

And fans have spoken at the box office. The firing of Lindsey Buckingham didn't hurt Fleetwood Mac's 2018-19 tour, which grossed $172 million. Still believing in their 1970s and '80s hits, Journey seems to be bigger than ever with replacement singer Arnel Pineda, plucked from a Filipino Journey tribute band.

With Stones tickets at a top face value of $496, they are drawing near-capacity crowds this fall. The group is sticking to its tried-and-true catalog. Is it about the band or the brand? The hits, or who plays them?

Bland takes a position that's equally philosophical and pragmatic. "Everybody's gonna die except the music," he said. "So we might as well hold onto it as long as we can."