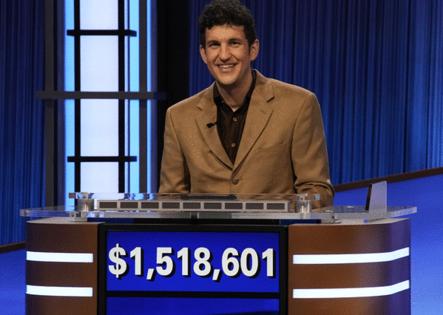 You have questions. I have some answers. And a LOT of you had comments about “Jeopardy!”

“I enjoy watching winners who keep on winning. The Matt Amodios, James Holzhauers and Ken Jennings are fun and exciting to watch. No time limits please.”

“My friend and I discussed it and decided we were bored as well. We are long-time viewers of ‘Jeopardy!’ and say there should be a time limit on contestants.”

“As a veteran ‘Jeopardy!’ viewer, I think it’s boring when we get back to the ho-hum of two-or-three-day wunderkinds after runs like Amodio, Holzhauer and Jennings.”

“It doesn’t matter to me how long a player stays on top. What I would like to see is a return to harder questions. One of the things I used to love about the show is that I always felt a little smarter after watching and really impressed with the brainiacs that were playing. Nowadays, not so much.”

“I agree with the person in your column today that “Jeopardy!” has become boring. There is no competition. One only needs to watch the last five minutes to see if the present champion wins again in a walk-away. Has the level of the contestants gone down?”

“I think that the problem wasn’t the number of wins, but the actual contestant, Matt Amodio, whose voice and delivery was droning, humorless and lacking any spark of energy. I couldn’t stand watching him from almost the first time I saw him, and I realized that Ken Jennings, James Holzhauser and all the other big winners, including Amodio’s successor, Jonathan Fisher, have a pleasing personality and an energetic way of being engaged in the game! So relieved when Matt was eliminated.”

To sum up, I haven’t seen this many letters about one program since Tyra Banks became host of “Dancing with the Stars.” (We’ll let that issue rest this week.) As for “Jeopardy!” I may not like individual winners, but I still enjoy open-ended competition. And now for some other topics.

Q: Do you know when “Ozark” will be returning?

A: The Netflix series starring Jason Bateman will debut what it’s calling “Season 4 Part 1” on Jan. 21, 2022. That seven-episode run is the first part of the show’s final season, with the remaining seven episodes to air at a not-yet-announced date.

Q: On “The Rookie,” the first episode of this season had Jackson killed off. Did the actor who plays him decide to leave the show?

A: Yes. Titus Makin Jr., who had played young policeman Jackson West, reportedly decided to leave and the show then killed his character. As of this writing, Makin has not made public a reason for departing the series, where he had been appearing since it began in 2018.

Q: While we were living in Arkansas in the late ‘80s we saw a movie called “End of the Line,” we think. Wilford Brimley was in it, we think. It was a story about a railroad that I think was closing. I am not really sure about the rest. Is this a movie that exists?

A: Your thinking is fine. “End of the Line” starred Brimley, Levon Helm, Kevin Bacon, Holly Hunter and others, and was released in 1987. I have seen it streaming for free on Plex, IMDb TV and VUDU. It is also for rent and sale digitally on Amazon. There was a DVD release quite a few years ago, and even a VHS release.