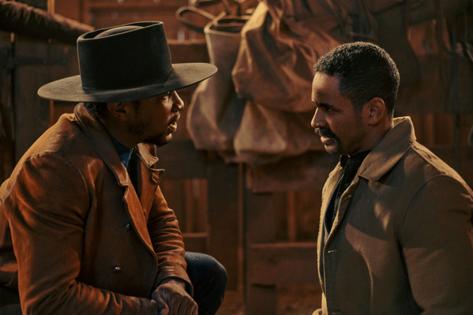 “I’m lightning with the blam-blams,” brags the quick-draw ace played by RJ Cyler in the violent, jokey, starry Western “The Harder They Fall,” premiering in theaters this week prior to its Nov. 3 Netflix launch. The ace’s name is Jim Beckwourth, based on a real 19th-century figure, as are many of the outlaws populating British co-writer, director and musician Jeymes Samuel’s larkish bloodbath.

The scale, the tone and the splatter go great with Samuel’s soundtrack. It’s loaded with dubstep, reggae, Ennio Morricone-adjacent orchestral swells and artists such as Jay-Z, who also co-produced. (Samuel goes by The Bullitts in the music half of his career.) For all the mashups and mayhem, there’s a hint of scrambled reality in the film, with a half-century’s worth of Black figures corralled into the same time period and the same narrative for imagination’s sake. In the words of the film’s opening titles: “These. People. Existed.”

A tale of the Nat Love Gang vs. the Rufus Buck brigade, “The Harder They Fall” works best as a mighty array of Black A-listers of two generations. You could also say “The Harder They Fall” consists on a diet of flourishes. Such as? Zazie Beetz in the saddle, in long shot, with her stovepipe hat; headliner Jonathan Majors, trying out Eastwood’s cheroot and Man With No Name hat; Idris Elba, effortlessly cool, even in shackles and convict stripes (not for long). Also, any script that takes a few seconds for one outlaw to explain the difference between “hearsay” and “see-say” knows a thing or two. Tarantino would’ve stretched that exchange into three pages.

The Quentin Tarantino influence is strong here, to be sure. The “Django” filmmaker’s frequent producer Lawrence Bender was a big force behind Samuels’ project. Revenge-wise, the premise keeps it simple. After witnessing his parents’ brutal murder at the hands of bad man Rufus Buck (Elba), young Nat Love grows up to be Majors, his character hellbent on revenge, though pleasant company in Majors’ hands.

Along with the rivalry of the two gangs, control of a small Western town hangs in the balance. There are uneasy alliances and one choice sight gag, brilliantly designed (thank you, Martin Whist) when the Black hombres ride into a town so lily-white, it’s literally the color of Ivory soap down to the dirt on the ground.

The huge, protracted gunfight climax might have more impact with a few less equivalents en route. After a while, the tit-for-tat slaughter grows wearying. There are times when an early line — “Why you sitting up here monologuing?” — comes back to haunt “The Harder They Fall’s” gassier verbal flights. Still, the cast is sterling. In addition to those mentioned already, there’s regal Regina King (Trudy Smith, deadly as they come), LaKeith Stanfield (Cherokee Bill, deserving of a spinoff) and Danielle Deadwyler as the androgynous colleague of Beetz’s Stagecoach Mary.

Eight years ago, Samuel made a warmup Western with a different cast but some of the same ideas and historical figures: “They Die By Dawn.” It ran 51 minutes. “The Harder They Fall” takes a longer way to town, but a lot of viewers won’t mind that. Not with these actors and this soundtrack.

‘THE HARDER THEY FALL’

Where to watch: In theaters Friday and streaming on Netflix Nov. 3.

LOS ANGELES — Five minutes into "The Power of the Dog," we meet Peter (Kodi Smit-McPhee), a frail-looking young man sitting alone in his room, painstakingly crafting paper flowers that will be placed as table ...Read More

Olivia Rodrigo, the 18-year-old pop sensation whose breakthrough song "drivers license" is one of the biggest hits of 2021, will hit the road next year on her first world concert tour. It opens April 2 at San Francisco's ...Read More

"The dad in the movie looks exactly like my dad. My dad owns that jacket," says "The Mitchells ...Read More

Three movies with international flavor — a French film about Japanese mountaineers, an American studio release set in a mythologized Southeast Asia and an anime from a Japanese master set largely in a virtual world — ...Read More