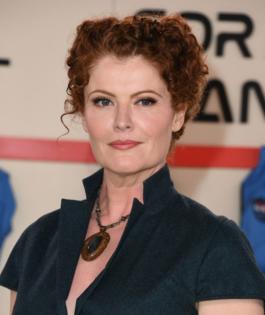 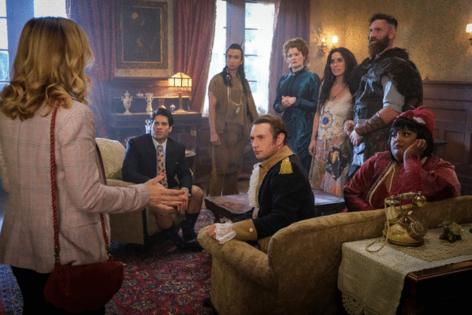 Each new episode of "Ghosts," which premiered earlier this month on CBS and Paramount+, features a Victorian-style mansion whose interiors and exteriors are an amalgamation of a real home in Los Angeles and sound stages in Montreal. This adaptation of a 2019 British series of the same name was developed for American television by Joe Wiseman and Altoona native Joe Port.

The house was inspired by the Baker Mansion, a 19th-century structure built on a hill in Altoona that served as a prime sledding spot for a young Port. Also of note: The mansion was originally owned by Elias and Hetty Baker, names that Port lifted for the spectral character of Hetty, played by York native Rebecca Wisocky, and her oft-mentioned husband Elias.

So this version of "Ghosts" has a Pennsylvania flavor, with one Keystone State native in front of the camera and one making many of the show's big decisions behind it.

"It's certainly different than anything on broadcast TV right now," Port told the Post-Gazette. "It has sort of a streaming feel. I think the line between broadcast and streaming is becoming more and more blurred, so it's a good time for CBS to try something like this."

Both Port and Wisocky are television veterans who take great pride in their Pennsylvania roots. Port described his formative years as a "very normal, kind of all-American upbringing in western Pennsylvania" and said he remains a huge Pittsburgh Steelers fan.

Wisocky spent much of her adolescence sharpening her acting chops at the York Little Theatre, now called The Belmont Theatre. She also attended the now-defunct Pennsylvania Governor's School for the Arts and did a summer program at Carnegie Mellon University in high school.

Port has been a writer or producer on some big-time projects, including Fox's "New Girl" and NBC's "The Office" and "Zoey's Extraordinary Playlist."

You've almost certainly seen Wisocky in one of your favorite shows over the past two decades. She's had guest roles on "Sex and the City," "The Sopranos," "True Blood," "American Horror Story," "Once Upon a Time," "Zoey's Extraordinary Playlist" and the final season of "Brooklyn Nine-Nine."

"I've been lucky to be afforded a pretty wide range of what I've been asked to do," Wisocky said. "I love doing comedy and lighter things, and I've done a lot of dark, bleak drama as well. ... I've been haunting your screens for years."

You can also catch her on "Dopesick," the recently released Hulu miniseries starring Robinson native Michael Keaton. She plays Cynthia McCormick, a Food and Drug Administration official partially in charge of regulating and labeling OxyContin. This role in a show about the opioid crisis dovetailed nicely with her research into an 1800s opioid epidemic around the time her "Ghosts" character would have been alive.

For Port, a show about British ghosts trying to get along with the living seemed like a perfect fit for American audiences. He and Wiseman had to come up with American archetypes to represent the house's centuries-long history. Port said they initially came up with about 20, then settled on eight primary ghosts.

Much of "Ghosts" involves Samantha communing with these spirits while her husband, Jay (Utkarsh Ambudkar), tries to keep up. It's mostly played for laughs, though Port credited the Baker Mansion-esque house for adding just the right amount of texture.

"It just has a very rich, filmic look," he said. "It looks like you're watching a period-piece drama, but it's a comedy."

Wisocky was drawn to the humor in the scripts and quickly began to feel like "I was born to play a dead, fancy lady." It was clear to her from the get-go that Hetty has "unfinished business" on Earth and is excited for audiences to see how the surrogate mother-daughter relationship between Hetty and Samantha plays out. She's also having tons of fun riffing with this cast.

"I come from the theater, and when you have 10 people in the room all playing the same game and keeping the ball up in the air, there's nothing more satisfying than that," she said. "To do that on a television show is really rare."

Port wanted Wisocky for Hetty after seeing how she "elevated the material so much" in her first audition, and the two have enjoyed working together and occasionally gabbing about their Pennsylvania backgrounds. Wisocky is excited to eventually return home and "have some chicken pot pie and Pennsylvania Dutch cooking."

Port had some parting words for his fellow western Pennsylvanians: "Go Steelers, and tune into CBS [for 'Ghosts'] on Thursday nights at 9!"