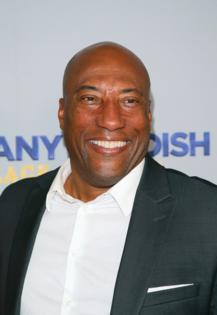 "That was my dream," Allen said of his father's job at Ford's River Rouge facility. "Then, when I saw Berry Gordy, I saw a different dream."

Gordy, the famed founder of Motown, had a success that awed Allen, who was a rising comedian when he met Gordy in the 1980s. Gordy inspired Allen "to look at myself differently and to pursue business and ownership."

Today, Allen, 60, owns a multimedia empire, he has written comedy — starting at age 14 — with David Letterman, Jay Leno and JJ Walker. He was the youngest stand-up comic to do "The Tonight Show" at age 18. He hosted the hit show "Real People" in the early 1980s.

Now the little boy who used to play baseball on the streets of Detroit, has his own star on Hollywood's famous street. On Wednesday, the Hollywood Chamber of Commerce honored Allen with the 2,706th star on the Hollywood Walk of Fame on Vine Street. It's next to Johnny Carson's star, the man who gave him his big break.

No Black person has done it

The night before the ceremony to receive his star, Allen was sanguine with an edge of giddiness at the thought that his three kids were impressed by it.

Ultimately, he remains humble and close to his Detroit values, even driving Ford vehicles. He now owns two Lincoln Navigator SUVs: A 2020 and a 2021 model year.

"I am truly blessed," Allen told the Free Press. "As a young kid growing up in Detroit, in a blue-collar family, I never dreamed I'd go to Los Angeles on a two week vacation with my mother and end up staying and one day have a star on Hollywood Boulevard next to someone who gave me a break, Johnny Carson."