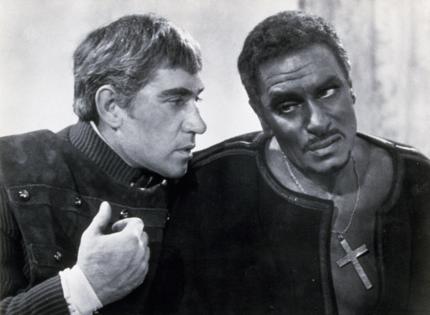 You might be wondering why I’m freely acknowledging my academic crime. But if my conscience isn’t clear — and whose can be? — it remains open for inspection.

Unlike composer Bright Sheng, who was compelled to step down from his class at the University of Michigan for showing the Olivier film, I have neither been assailed for racial insensitivity nor held up as a casualty of cancel culture.

I didn’t expose my students at the California Institute of the Arts to the film because I thought it was “one of the most faithful to Shakespeare,” as Sheng, whose class was focused on Verdi’s opera adaptation, told the New York Times. I’m not sure what “faithful to Shakespeare” even means. A film faithful to Elizabethan stagecraft or to an idea of Shakespeare that arose from a later theatrical tradition? Or perhaps just more textually in line than Verdi’s brilliant opera? Who can say? In any case, it was appropriate for Sheng to apologize.

I certainly didn’t include the film because I think it’s a masterpiece. I have a clear memory of my first encounter with the work, which I saw at a decrepit revival house in the East Village one summer night while still in graduate school. I went to check out a performance I had heard only positive things about at drama school. I may have been more curious about seeing a young Maggie Smith than I was the great Olivier, but I was in that stage of my education when I was compulsively checking off boxes.

I lasted maybe 20 minutes in the movie theater. Horrified by Olivier’s racialized prosthetics and West Indian minstrelsy, I fled into the night, angry that anyone could speak reverently about such a repugnant performance.

Dipping back into the writing of Pauline Kael, perhaps the most influential voice in film criticism of my lifetime, I was dismayed to discover this nugget in her 1966 review for McCall’s that she saw fit to anthologize in “For Keeps: 30 Years at the Movies,” published in 1994: “Olivier’s Negro Othello — deep voice with a trace of foreign music in it; happy, thick, self-satisfied laugh; rolling buttocks; grand and barbaric and, yes, a little lewd — almost makes this great, impossible play work.”

The cultural legacy of blackface is still with us. Pop culture manages to regularly get around the taboos, and politicians’ past pranks keep coming back to haunt them. Like it or not, Shakespeare is implicated in this history.

My course was designed to look at multiple interpretations of Shakespeare’s four major tragedies: “Hamlet,” “Othello,” “King Lear” and “Macbeth.” Three weeks of the seminar were devoted to “Othello,” in a journey that moved from page to stage to screen.

After a general overview that included a look at the National Theatre’s magnificent 2013 production with Adrian Lester as Othello and Rory Kinnear as Iago in a modern military revival redolent of Middle Eastern wars, we proceeded to discuss performance traditions, which inevitably brought us to the awkward subject of blackface.