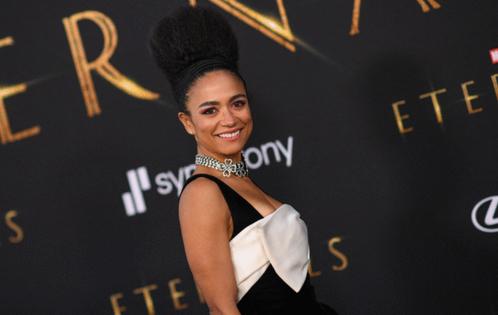 In the comics, Makkari is known primarily for her superhuman speed, which allows her to spin cyclones, run on water and defy gravity. In Marvel Studios' forthcoming adaptation, Makkari is also deaf — a key asset that distinguishes her from her fellow celestial protectors.

"Let's just say Makkari would not be as fast as she is if it wasn't for her deafness," Ridloff told the Los Angeles Times at Monday's world premiere of "Eternals" in Hollywood. "I can't wait for people to see the movie and be able to finally talk about it."

"Eternals" follows a coalition of cosmic beings tasked with saving humanity from monstrous forces known as the Deviants. Directed by Oscar winner Chloe Zhao, the film boasts the most diverse cast in MCU history — including Ridloff, a Black and Mexican American deaf actor who plays the franchise's first deaf superhero.

"When I came to the process, Marvel already had a treatment, and these characters were written in the treatment, so I was very impressed by their fight for diversity," Zhao told the L.A. Times at the premiere. "Not just in terms of gender, race. Different types of diversity. That's one of the reasons why I was drawn to the project."

The Disney tentpole is also the first MCU installment helmed by a woman of color: Zhao, who is Chinese and made history when she won an Academy Award this year for directing "Nomadland."

"Just to know that I was working with a director like Chloe, I felt very safe," Ridloff said. "We went through this whole new path as the first deaf superhero in the MCU, but under her direction, I knew that she would do me justice. And I knew that ... authentic representation really is important to her."

Throughout the production process, Ridloff and Zhao engaged in many conversations about portraying Makkari authentically in an effort to defy stereotypes surrounding the deaf community.

"I kept wanting to check in about how we would actually reveal my deafness in the storyline, and we finally got to a point where I felt like we could actually show Makkari as having a deaf benefit or a deaf gain," Ridloff said.

"That's a word that we use within the community" — as opposed to "hearing loss" — "to show the idea that being deaf can actually be a good thing too, and we show that in the movie."

The crowded "Eternals" ensemble represents a variety of abilities, ethnicities, genders, ages and sexualities. Though there are a whopping 10 Eternals in the main cast, the president of Marvel Studios has said that, if there's a lead in the film, it's Gemma Chan's Sersi.

That would make Chan the first woman of Asian descent to headline a Marvel movie.

"We are so different — each of us, from each other — our backgrounds, our cultural heritage," Chan told the L.A. Times at Monday's premiere.

"But we kind of became like one big, dysfunctional family, and it was about being supportive of each other and celebrating our differences."

"Eternals," which opens in theaters Nov. 5, also introduces the franchise's first gay superhero in Brian Tyree Henry's Phastos. And Haaz Sleiman, who plays Phastos' mortal husband, said he "couldn't be luckier to be a part of" the inclusive project.

"This is the world that we live in," Sleiman said. "It is diverse. We are all these different kinds of people. That's what makes us beautiful."

Marvel producer Nate Moore — who has also worked on the "Captain America" movies, "The Falcon and the Winter Soldier" and "Black Panther" — cited the success of "Black Panther," "Captain Marvel" and "Shang-Chi" as evidence that inclusivity attracts moviegoers.

"For a long time, there seemed to be an unspoken rule that diverse casts wouldn't draw people to theaters, and I don't think that's true," Moore said. "Hopefully, this is just another brick in the wall that proves that hypothesis is wrong and encourages other studios to take chances on big movies with diverse casts.

"Chloe is a woman of color," he added. "She also just happens to be a fantastic filmmaker, and I think that's the most important thing. It's not her gender, not her nationality. It's that she's got a great eye and wants to tell a great story."

In addition to being diverse, the cast of "Eternals" is also star-studded. Rounding out the titular team of godlike saviors are Salma Hayek as Ajak, Richard Madden as Ikaris, Don Lee as Gilgamesh, Barry Keoghan as Druig, Kumail Nanjiani as Kingo, Lia McHugh as Sprite and Angelina Jolie as Thena.

"I feel so fortunate to be in such good company and to be working with such amazing people," Chan said.

"In particular, Angie and Salma I've admired for a long time. They're such powerful women. The guys aren't bad as well, I should say ... I feel very lucky."

Ridloff was also a big fan of Jolie and Hayek before acting alongside them in "Eternals," while 14-year-old McHugh had a "freak-out little girl moment" upon meeting Madden — aka Prince Charming himself from her generation's version of "Cinderella."

"I was so surprised about how warm, kind and caring [Jolie] was as a person," Ridloff said. "Angie is very collaborative. She actually looks out for the best of all of us ...

"And I really look up to Salma," she added. "I remember when I first saw her — in the movie 'Desperado' when I was in college — I was already in love. And to work with her? I mean, wow."