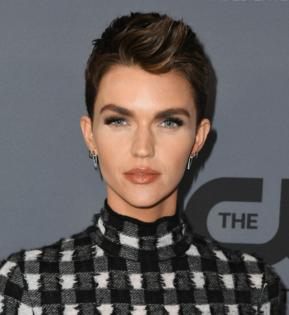 Former “Batwoman” star Ruby Rose unleashed a series of allegations Wednesday about toxic working conditions that led to their abrupt departure from the TV show in 2020 after just one season.

Rose, who played both the titular superheroand Kate Kane on the series, made good on their promise last year to reveal more about the exit by detailing alleged problems on set. Rose mentioned serious injuries that they and other crew members sustained while working on the groundbreaking series, as well as other incidents that resulted in Rose leaving.

“Dear CW... Enough is enough,” Rose wrote in a series of Instagram stories. “I’m going to tell the whole world what really happened on that set. I will come for you so what happened to me never happens to another person again. And so I can finally take back my life and the truth. Shame on you.”

Rose began the tirade with Roth, whom they alleged forced Rose back to work shortly after having surgery for two herniated discs following a stunt injury.

“To everyone who said I was too stiff on batwoman.. imagine going back to work 10 days after this,” Rose wrote, sharing a video of the surgery. "...10 DAYS!!!!!! (or the whole crew and cast would be fired and I’d let everyone down.”

Rose said they had a broken neck, a broken rib and a tumor that was “diagnosed years ago” but claimed they couldn’t have them treated properly. The actor alleged that Roth threatened to recast the “Batwoman” role, fire the whole cast and crew and told Rose they “lost the studio millions (by getting injured on his set).”

Though Warner Bros. TV made no mention of the working conditions Rose alleged, the studio fired back at its former star in a statement that instead cited complaints about Rose’s workplace behavior.

“Despite the revisionist history that Ruby Rose is now sharing online aimed at the producers, the cast and crew, the network, and the Studio,” a statement to The Times said, “the truth is that Warner Bros. Television had decided not to exercise its option to engage Ruby for season two of Batwoman based on multiple complaints about workplace behavior that were extensively reviewed and handled privately out of respect for all concerned.”

Rose also described a crew member’s third-degree burns over his whole body and “being given no therapy after witnessing his skin fall off his face,” and then being “told to do a sex scene without a minute to process.” Rose also cited a production assistant who was paralyzed after an on-set injury. The accident occurred because the show “refused to shut down when everyone else did because of COVID,” Rose alleged.

A person familiar with the situation but not authorized to discuss it publicly told the Los Angeles Times that many of Rose’s allegations were unfounded, specifically those involving Roth and additional injuries to the star and others on set.

Representatives for Rose were not immediately available Wednesday for additional comment.

Rose concluded by asking fans to stop asking whether they would ever return to “to that awful show.”

“I wouldn’t return for any amount of money nor if a gun were to my head. NOR DID I QUIT. I DID NOT QUIT. They ruined Kate Kane and they destroyed Batwoman, not me,” Rose wrote on Instagram. “I followed orders, and if I wanted to stay I was going to have to sign my rights away. Any threats, any bullying tactics or blackmail will not make me stand down.”

Rose’s allegations and Warner Bros. Television’s response Wednesday were a stark departure from the laudatory statements they released when Rose first left the show. (Rose was later replaced by Javicia Leslie, who donned the “Batwoman” mantle in Season 2.)