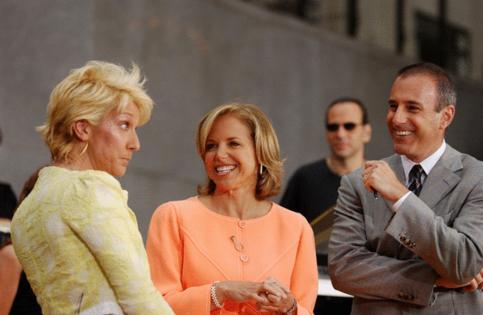 Asked where her relationship stands now with Lauer, who was fired in 2017 for what NBC called “inappropriate sexual behavior,” toward female colleagues, Couric said flatly, “We have no relationship.”

While snippets from “Going There” leaked before the Oct. 26 publication date shed a light on her mean-spirited conduct over the years — especially when it came to a lack of mentorship toward some female colleagues — Couric said her goal was not to snipe, she told anchor Savannah Guthrie on NBC’s “Today.”

“I wanted to share the messy parts,” said Couric, who was dubbed “America’s Sweetheart” while hosting “Today” show for 15 years.

“I couldn’t imagine writing something that wasn’t honest and radically transparent,” Couric said. “I didn’t want to do a victory lap, or my greatest hits. I’ve had an extraordinary life, incredible opportunities, I’ve had huge successes; I’ve had some pretty public failures, too.”

As with many television personalities, “people have always said, ‘I feel like I know you,’” Couric told Guthrie. “But as I say in my prologue, the box puts you in a box, the flat screen flattens.

One of the messiest was the series of revelations about Lauer, whom she worked with for nine years.

“That was really, really hard, and it took me a long time to process what was going on,” Couric told Guthrie. “Because the side of Matt I knew was the side of Matt I think you all knew. He was kind and generous and considerate, a good colleague.”

But the emerging revelations made her wonder if she’d known him at all.

“As I got more information and learned what was going on behind the scenes, it was really upsetting and disturbing,” Couric said. “I talked to people, I really tried to excavate what had been going on. And it was really devastating but also disgusting, and I think what I realized is there was a side of Matt I never really knew. And I tried to understand why he behaved the way he did and why he was so reckless and callous, and honestly abusive to other women.”

Back then, she added, the issue of power imbalance was not understood when it came to consent.

“I think our notion of what a consensual relationship is has changed dramatically, and you have to consider the power dynamics,” Couric said.

In the book, she reproduced text messages between her and Lauer to illustrate “how our relationship devolved and ultimately deteriorated,” Couric told Guthrie.

“I thought that was a powerful way to really let the reader into my thought process, and how as I got more and more information it was harder and harder for me to reconcile these two sides.”

Brian May is striking back against a British publication that he says “subtly twisted” his words to make it sound as if he were hostile toward transgender people.

The Queen guitarist was quoted last week in the Mirror...Read More

“The Power of the Dog” may be set a century ago, but star Kodi Smit-McPhee believes his haunting Western drama examines horrors that still persist today.

The Montana-set movie explores the intense dynamic between a ...Read More

In 2021, coming-out stories are pretty standard and widely accepted — unless you are Colton Underwood, “the virgin Bachelor,” a man who lived out heterosexual dating fantasies three times over the course of two years...Read More

Channing Tatum is prepared to take it all off again.

The 41-year-old actor will reprise his role as stripper Mike Lane for the third “Magic Mike” movie, he announced Monday.